From author Edward Bruessard, ‘The Age of Homo Sapiens Sapiens: Heaven or Hell’ is a labor of love and born of Bruessard’s sincere belief that human beings are the key to changing the world. Asking key questions about science, war and love, this book is sure to enthrall readers who dream of a heavenly existence for their beloved planet.

To solve Earth’s issues of poverty, disease, illiteracy, starvation, overpopulation, shortages of clean water, corruption, racial and ethnic prejudices, war, murder, and environmental despoliation with a single piece of writing is certainly a challenge. To the author of the new book, ‘The Age of Homo Sapiens Sapiens: Heaven or Hell’, the challenge is a lifelong mission.

“It’s my passion,” says Bruessard, who spent decades fine-tuning his debut. “I sincerely believe that a future of Heaven on Earth for the living – one that is composed of prosperity, mutual respect, knowledge, wisdom, unity, and peace – will prevail. The threat of Hell always lingers, but human beings are intelligent. They alone have the power to choose the fate of the world.”

‘The Age of Homo Sapiens Sapiens: Heaven or Hell’ is a formidable work of rare and stunning power. With its emphasis on choice, its moving exploration of the human condition on earth and its array of topics from romantic love, to guns, to religion, Bruessard’s book is set to change the way people see their place in the world.

Synopsis:
This book is about the future, and it is about the human condition at the dawn of the 21st century. Will future life on Earth be more like Heaven, or will it be more like Hell? This book takes the position that humans are empowered with the intelligence to choose their fate. This book places a spotlight on some possible activities and events that could lead to a heavenly future for humans, and it places a spotlight on other kinds of activities and events that could lead to a hellish future for humans on Earth. The book implores humans to choose life over extinction. In choosing life, the book further implores humans to choose the civilized way of life. Among other things, the civilized way of life entails acceptance of a value system characterized by democratic political institutions, free market economic institutions, the scientific educational method, and individual liberties within the rule of law (including the freedom of religious worship). The Age of Homo Sapiens Sapiens is both a state of mind and a new way of living. The Age of Homo Sapiens Sapiens also reflects an acknowledgment of the unique role of humans in the natural world.

It was only a chance event in the global economy that led Bruessard to finishing his manuscript, which for years had been gathering dust in the corner of his garage.

“After the recession in 2008, I was laid off from my job and proceeded to focus my attention on my writing,” says Bruessard. “I was able to update, expand and finally release the book to the public. I also created a website (http://bruessard.com) as a companion to the book. It took blood, sweat and tears, but it was worth it. To finally share my message with the public, it felt like the time was right.”

Continuing: “We truly can have that heaven-like existence right now on Earth, and I believe it’s our duty to create that for ourselves.”

About Edward Bruessard
The author is another human among billions who made a decision to step forward, speak out, and attempt to make a positive difference on this magnificent planet called earth. He attended undergraduate school at Mississippi Valley State University (M.V.S.U.) where he studied political science with an emphasis on international relations. He attended graduate school at Bowling Green State University (B.G.S.U.) where he studied public administration with an emphasis on administering the local governmental sector. After college, the author pursued a career in the financial industry. 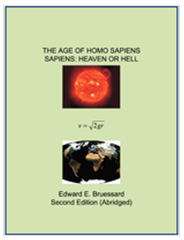