When a teenager follows his Father through a portal that magically appears in front of their computer screen, life transforms into an unimaginable saga. Boasting twists, surprises and the occasional abduction Dianne Lynn Gardner’s latest novel is set for true literary success.

‘Deception Peak’ is the first installment of ‘The Ian’s Realm Saga’, a new series of books released by Hydra Publications. Telling the story of teenager Ian Wilson, the series is poised to grip young readers around the world.

The book’s synopsis is truly powerful:

The series is titled ‘The Ian's Realm Saga’. The first book, ‘Deception Peak’ is a young adult adventure fantasy about a teenager, Ian Wilson, who follows his father through a portal that magically appears on their computer screen. They travel into a deceptively beautiful Realm, where horses run free, the wind sings prophetic melodies, and their computer avatars come to life.

But when the two are separated, Ian is abducted by a tribe of dragon worshipers and is forced to find his courage. As he struggles for his freedom and embarks on a perilous search to find his father, Ian meets the true peacekeepers of the Realm. It's then that he learns he has a greater purpose for being there.”

As the author explains, her stories present an intricate journey through the life of the protagonist.

“If you like a good adventure into the unknown, fantasy, lots of twists and surprises, and deep character relationships, this is the book for you,” says Gardner, who also illustrated her debut book and does the cover art.

“Gardner's prose is very descriptive: the sights, sounds and smells of the Realm are brought vividly to life; it was easy to picture it. I thoroughly enjoyed reading about a reluctant hero finding resolve and reserves of courage in testing circumstances. The value of friends and family, being able to survive in hostile surroundings, becoming self-reliant, are all excellent themes for children to learn…and with a title like ‘Deception Peak’ you should expect plenty of mind games, trickery, and sorcery!” says The Independent Review –UK, publishing their comments on Amazon and Goodreads.

In fact, the response has been so strong that Gardner is looking forward to releasing the highly anticipated sequels. A recent announcement confirmed the upcoming titles as ‘The Dragon Shield’, ‘Rubies and Robbers’, ‘The Diary of a Conjurer’ and ‘Cassandra's Castle’.

“There are four mythical-legend short stories that are being published once a month until book 2 is published early next year. Aimed at boys, they provide a captivating read,” Gardner concludes.

“Deception Peak”, published by Hydra Publications, is available from Amazon in Paperback and Kindle formats.

More information can be found at the following locations:

About Dianne Lynn Gardner
Dianne Lynn Gardner is both an author and illustrator living the Pacific Northwest. She's an active member of the Society of Children's Book Writers and Illustrators, and the National League of American Pen Women. She has written young adult fantasy novels as well as articles for national magazines and newspapers. She's also an award-winning artist.

Dianne spent many years living out in the desert wilderness of the American Southwest, lived in a hogan made from adobe and cedar for thirteen years, co-owned 25 horses both pure bred and Native American ponies, traveled horseback and by wagon throughout the Navajo reservation, herded sheep and goat, worked in the forest planting trees and piling, farmed on barren soil and even lived in a tepee for a short while. She spent many long years using survival skills as a way of life.

Later she studied pastoral counselling and was a Pastor's apprentice at a mainline church. She and her husband have been feeding the homeless for over twelve years. Today she draws on both her survival experiences and her love for people, especially young people, into her writing, seeking not only to give her readers a firm understanding of her stories' characters, but a rich appreciation of nature. 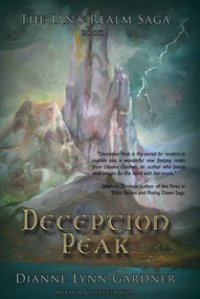