At just twenty two, Peter Wilson released his debut novel just a year after graduating from University. With positive reviews flooding in from across the continent, Wilson’s literary career is set to compete with the most established of writers.

Toronto, Ontario -- (SBWIRE) -- 08/29/2012 -- While most graduate from University and struggle to maneuver the job market, Peter Wilson had a different plan in mind. Replacing essays with a manuscript, Wilson has penned his debut novel and today announces its general release.

Defenseless tells the story of when a fight with two escalates into a six-on-one attack. As the protagonist pieces together what happened, his desire for justice evolves into a rich thirst for violence and revenge, and victim becomes perpetrator. Should he have just walked away?

Laced with sharp references to pop culture and manic dreams, the novel is appealing to those who crave fast-paced, involved fiction.

“If you are engaged by first-person narrative and a ‘stream of consciousness’ writing, you will find this book to be a great read,” explains Wilson, who has since completed his second novel.

He continues, “Defenseless pulls the reader through the true nature of a desire for revenge with doses of morality at every turn.”

Even though it’s his first published work, Wilson has managed to stun critics. Praising Defenseless for its emotional yet thoughtful writing style, frequent literary and film allusions captivate readers and drag them deeper into the book’s narrative.

“There is a distinctive style to this book which makes it unique. My goal was to write something fictional, yet so vivid that it could play out in the real life of any of its readers,” Wilson adds.

Having completed two screenplays, as well as his second novel, North America can expect to hear more from this rising author.

In the meantime Defenseless, published by BPS Books, is available now from Amazon.com in paperback format.

Peter Wilson’s progress can be followed on Twitter: https://twitter.com/petewilson1989 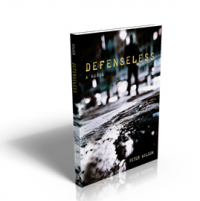