Set in Afghanistan, ‘Desperate Situations’ depicts the tumultuous relationship between a helicopter pilot and an ex-special forces agent whose chance at love is fiercely restricted by the constraints and responsibilities of their job. When the heroine’s true identity is unexpectedly revealed – will protagonist Jake pursue the ardent love affair that he longs for?

Little Rock, AR -- (SBWIRE) -- 08/14/2013 -- While the worlds of action-packed war and sweet romance rarely meld in fiction, a powerful new novel by Idaho’s Abby Holden puts both under the limelight with great success. Based on the recent events of the United States military in Afghanistan, ‘Desperate Situations’ proves that the raw emotion of love will always prevail over conflict.

An ex-Ranger, Jake McGrew, leaves the military to join a mercenary group in Afghanistan. Here he meets up with Megan Cartwright, the best helicopter pilot he’s ever met and his new boss.

She has a problem with Special Forces men and has sworn off romance only to find herself attracted to this ex-soldier. As she leads them through many desperate operations, each one more harrowing than the next, she ends up revealing to McGrew her deepest secrets.

Will they survive to ‘live happily ever after'?

As the author explains, her narrative straddles many genres to make it a wholly unique read.

“Fiction always affords readers an escape from the real world, but I want to take things to the next level by bringing together unusual situations. There are many books about war and participants’ relationships with those back home, but few bring the love story directly onto the battlefield,” says Holden.

Continuing, “This is achieved by the character of Megan – she’s a tireless female helicopter pilot. The fiction world often lacks these strong female characters and, by including Megan, it is easy to fuse the harrows of active military deployment with a love story that will make the heart beat a little faster.”

For example, J. Douglas comments, “This book is brilliant. It was a good thought-out story which kept you enthralled and on the edge of your seat the whole time. Excellent I hope Abby is going to write more books in this theme.”

Answering her fans’ calls, Holden can confirm that further books are in the works.

“Just like a great battle, I’m diligently planning a sequel. While I’m not yet in a position to announce details of its release, I can confirm that the working title is ‘Evasive Manoeuvres’. Keep your eyes and ears peeled for more information!” she adds.

With ‘Desperate Situations’ expected to see increased demand, interested readers are urged to purchase their copies as soon as possible.

About ABBY HOLDEN
ABBY HOLDEN lives in South Dakota where she battles the wind and humidity. Living near DeSmet, SD where Laura Ingles Wilder lived and wrote, provides inspiration for her. 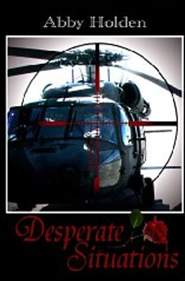