New York, NY -- (SBWIRE) -- 10/16/2014 -- Director Arturo Alanis is heading up a crew of young independent filmmakers who are putting a new slant on a traditional film genre, the horror movie.

It’s called Lamia and includes all the terror and suspense of a typical horror film, with an original spin. “This movie will be what you expect in some regard but there will also be some surprises and very creative aspects to it that horror fans will find very interesting,” said Alanis, a Mexican filmmaker studying Film and Television at NYU’s Tisch School of the Arts.

The Lamia production team – featuring producers Devin Tusa, Nick Rasdal and Remington Long – is made up of a group of young filmmakers based out of New York City, most of whom are attending the Tisch School at NYU.

The eerie, yet highly engaging, plot centers on Andrew, an 11-year-old Long Island boy who is a big fan of horror films. Andrew awakens one night to find himself confronted by the Lamia, an ancient, ungodly demon. Andrew must confront his worst fears as the Lamia manifests itself in the possessed, re-animated body of his mother, Ana.

As the young boy fights back against the terrors of his imagination and reality, he ultimately has to decide: which is which? Lamia is a psychological thriller as well as a horror flick.

Although the cast and crew are donating their time to this project, there are numerous other expenses involved with independent filmmaking. Alanis is estimating that he’ll need $8,000 for production equipment (cameras, sound gear, etc.), production design, costumes and makeup, transportation and housing, and meals.

In order to generate this capital, he has launched an Indiegogo campaign, which can be viewed at https://www.indiegogo.com/projects/lamia-a-horror-film

He is counting on horror movie enthusiasts and indie filmmakers to help support this project. Donations of any amount are welcome.

For $20, backers will receive a digital copy of the film’s poster. A $50 pledge is good for a digital download of Lamia. And for $200, you can become a guest production assistant and visit the set while filming is taking place.

“We understand that not everyone may be able to contribute financially,” said Alanis. “You can still help us out by spreading the word through Facebook, Twitter, Instagram and other social media. There’s a tool on the Indiegogo page that will help you do this.”

Alanis can be reached directly at arturoalanis95@gmail.com

About Arturo Alanis
Alanis is a Mexican filmmaker studying Film and Television at NYU’s Tisch School of the Arts. Director Arturo Alanis is heading up a crew of young independent filmmakers who are putting a new slant on a traditional film genre, the horror movie. 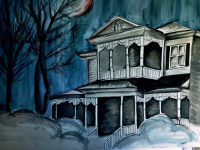