A new universe created with the unbeatable real-world special effects techniques of the late 70s/early 80s.

San Rafael, CA -- (SBWIRE) -- 04/24/2014 -- In the early 2000s, science fiction special effects changed forever. When they become an all digital process, certain type of sci-fi world was lost: the gritty “used-universes” like the ones seen in the original Alien, early Star Wars, and many others.

In those worlds, everything felt different. One could believe a spaceship could travel across the galaxy because under the layers of grime, he/she could actually see the intricate details that powered it. The characters felt like they were part of a real future world. They wore uniforms that weren’t a CG addition, and they could actually touch and interact with their surroundings. In fact, these sci-fi worlds were real, created in a workshop. As modern films have largely left that behind, it’s a universe that has little chance to be seen again on a grand scale. The team on this project wants to change that and their backers can help them resurrect a lost art form.

Big Future’s story begins with Jet, a young phone hacker in 1981. After receiving a strange distress signal, she is transported to a future world where she must find the pilot who sent it. But the pilot’s disaster was no accident, and some very dangerous people want to stop her. Fortunately, Jet’s fascination with technology will help give her an edge, and a well-connected gangster (with one sweet ride) will lend her a hand, as long as she doesn’t trust him too far.

Most recently, Big Future has added actor Bryce Johnson (Pretty Little Liars, Supernatural) to play the futuristic gangster. Bryce brings the perfect level of cool to the project and is a huge fan of the genre saying, “I grew up on those movies 'Aliens' , 'Blade Runner', 'Terminator'. They have informed everything I love about movies, technology and the future.”

Big Future will be a one hour series pilot. A full adventure in a universe so comprehensive, the creators hope it will inspire further exploration into this kind of science fiction as a series. 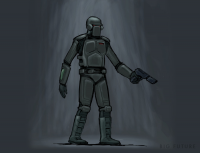