The book wins in the Conscious Media/Journalism/Investigative Reporting Category

Teton Village, WY -- (SBWIRE) -- 06/14/2013 -- Disconnect: The Truth about Cell Phone Radiation, What the Industry Is Doing to Hide It, and How to Protect Your Family (Plume; September 27, 2011; $16.00) by Dr. Devra Davis, has won a 2013 Silver Nautilus Book Award in the Conscious media/Journalism/Investigative reporting category. The Nautilus Book Awards represents Better Books for a Better World, recognizing books that promote spiritual growth, conscious living and positive social change. Dedicated to excellence and the highest of standards, Nautilus Awards honors and promotes books that inspire and connect our lives as individuals, communities and global citizens.

Deemed one of today’s most innovative books for revealing industry war-games against science and new evidence on health risks of cellphone radiation, Disconnect clearly articulates a clear, compelling and comprehensive look at this issue. One of the foremost experts in the field, Davis lucidly explains the science behind cell phone radiation, documents the outdated nature of U.S. government regulation, and uncovers the cell phone industry’s pattern of “war-gaming” scientific evidence of cellphone hazards.

“I share Dr. Davis' concern about the long term impact of cellphones and other wireless radiation and applaud her efforts to make us all aware that while we need more information about impacts on human heath we understand the need to reduce exposures of the brains and bodies to microwave radiating devices while we await the development of such information.” said Dr. Mark Hyman, Founder and Medical Director at the UltraWellness Center and the Chairman at The Institute for Functional Medicine.

"As my science blog, Between a Rock and a Hard Place makes clear the science on cell phones is indeed complex. Most scientists who understand the complexity avoid engaging with the public on this important universal exposure. As someone whose work is now devoted to dissecting science for public understanding, I am pleased to have Davis as a colleague who has courage to speak openly on cellphones and health in her book Disconnect. In this award-winning work, she clearly describes the persisting and unresolved scientific questions that the world must answer. With more phones than people in many countries today, this book should be a wake up call to all those concerned with ensuring that public health is not endangered but enhanced by this universal technology,” said Dariusz Leszczynski, a research professor at the Radiation and Nuclear Safety Authority in Finland and a visiting professor at Swinburne University of Technology in Australia.

Few of the world’s five billion cell phone users question whether their phones are safe. In fact, these devices are small microwave radios that can release harmful radiation. In the United States, cell phone safety standards were set almost three decades ago, prior to the era of handheld wireless technology. Those standards assume that the average cell phone call lasts less than six minutes and is made by a tall adult man. But today, many calls last much longer—and more than half are made by children under the age of 20, whose thinner skulls and more-fluid brains are more susceptible to harm from radiation.

Dr. Davis does not advocate giving up cell phones; she still uses them with a speakerphone or headset. But as Disconnect plainly shows, it is time to start demanding safer cell phones from manufacturers and higher safety standards from U.S. regulators.

About the Nautilus Book Awards:
The Nautilus Book Awards are named for the mollusk whose beautiful, pearl-lined shell contains chambers of increasing size which the sea creature constructs for itself as it grows. The nautilus symbolizes both ancient wisdom and expanding horizons; both the elegance of nature and a continual growth of understanding and awareness.

About Environmental Health Trust
Environmental Health Trust (EHT) educates individuals, health professionals and communities about controllable environmental health risks and policy changes needed to reduce those risks. Capitalizing on growing public interest in Dr. Devra Lee Davis’s popular books, When Smoke Ran Like Water, a National Book Award Finalist, The Secret History of the War on Cancer, and Disconnect: The Truth About Cell Phone Radiation, What the Industry Is Doing to Hide It, and How to Protect Your Family, the Nautilus silver medal award winner for courageous reporting, and recent documentary films, the foundation’s website is the go-to place for clear, science-based information to prevent environmentally based disease and promote health, and will have portals for the general public, children, and health professionals. For more information about getting involved in the numerous special projects spearheaded by the EHT, please log on to http://www.ehtrust.org and find EHT on Facebook 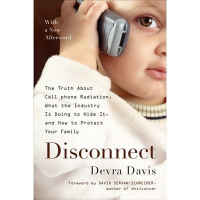