Divx Player from MediaFreeware.com Offered at No Cost to the Consumer

New York, NY -- (SBWIRE) -- 09/12/2013 -- The DivX codec is generally regarded as one of the most efficient ways to encode video. DivX files tend to be comparatively small considering their quality. Long videos can often be converted into quite small files, making it possible to condense a feature film into a 700mb file. This feature of the codec has made it extremely popular for distribution of video files online.

The popular freeware software designers and distributors MediaFreeware.com, recently unveiled a new free software application designed to play video files that have been encoded in the DivX codec.

The software is compatible with all of the latest versions of the Microsoft Windows operating system, and can be downloaded at absolutely no cost to the user.

The interface has been specifically designed to be simple for novices, but with access to the advanced features that experienced DivX media file users may need. Once users become adept with the software’s basic functionality they can easily begin experimenting with more complex features, giving them an exceptional level of control over how they watch DivX files.

The DivX player has been written in an exceptionally streamlined way, which gives it a low memory footprint. It takes up a very small amount of RAM, and doesn’t hog processor power even when playing high definition, full screen videos. This is vital for people who own slightly older computers.

A spokesman for MediaFreeware.com said: “DivX has been an incredible success since its initial introduction. It has some exceptional capabilities, especially its ability to condense extremely long videos down to comparatively tiny files. That’s one of many reasons why DivX has become so popular on the web. Like most file formats, it’s not unusual for people to occasionally have trouble playing downloaded files. In most cases this is because Windows Media Player, the default media player for the Windows operating system, doesn’t have inbuilt DivX playing capabilities. We’ve created a small, streamlined and fast free DivX player to solve this problem for Windows users.” 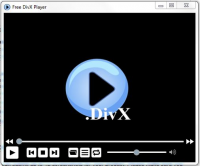