Do As I Say: A New Murder Mystery by David A. Sterling Draws Readers Into a Murder Investigation Where Nothing Is As It Appears to Be

They say “Don’t judge a book by its cover.” In this case go ahead and judge!

Peachtree City, GA -- (SBWIRE) -- 07/24/2012 -- For David A. Sterling’s protagonist Agent Bennett Mills, life just isn’t easy. After waking up to the news that the man he was charged to protect was assassinated things just continue to go downhill from there. Each page guarantees another twist to this incredibly captivating plot

This is the inaugural book in Sterling’s “Bennett Mills Murder Mystery” series.

Official Synopsis: “Agent Bennett Mills s a member of a special security detail charged with the protection of a prominent Arizona senator…until the senator is assassinated.

With the suspected assassin having taken his own life it appears to be an open and shut case, but something doesn’t sit well with Agent Mills. While waiting for reassignment, he takes some vacation time making a less than enthusiastic trip home to see his family.

A chance meeting leads Mills on the trail of a madman that is often fraught with more questions than answers. Who can be trusted? Every step forward leads to another dead end.”

While it was only published in June, the book is already garnering consistent five-star reviews.

“I loved it! It was fast moving and filled with suspense and intrigue. I had to make myself put it down at night so I could get up for work the next day!” says Nancy, who reviewed the book on Amazon.com.

“This is one of those books you just keeping reading until you fall asleep or you have to go to work. The writing is easy, clear, and tight. Almost all the details provided add to the story, though there may be a few details added to throw a good mystery buff off the scent for a while. The plot is quite good and the twist -yes, there is a twist of sorts - is one most of us will never see coming. I suggest you don't even try, it is that well done.

The romance is also a nice addition to the story and never overpowers the actual plot of the tale. Given the circumstances, it comes off as completely believable. The secondary romance in the book also has a sweet, it could easily happen feel to it. This is exactly how sex and romance should be done in a book that is not a "Romance" novel.

There is enough action in the book to keep action readers happy and in fact the first few days of the investigation feels like two weeks because so much happens in such a short time.

Sterling was able to balance main characters with secondary characters so the reader is never confused by trivial details about unimportant characters; something new writers often fail to do.,” she said.

Encouraged by the strong early reviews received, Sterling has announced that a sequel is already in the works which promises to deliver all the page gripping elements that readers are just starting to discover, and love about “Do As I Say”.

Do As I Say is available now for all popular e-book formats and in paperback on Amazon It can be purchased here.

In the summer of 2005 he relocated his family to Peachtree City, GA.

David & his wife have three children. Their daughters are currently attending the University of Georgia, and their son is a junior in High School.

David is currently working on a sequel to his murder mystery "Do As I Say" and hopes to release it sometime in early 2013. 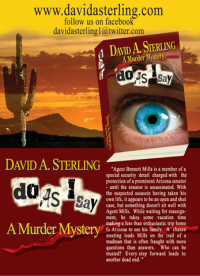