The Association of Professional Animal Waste Specialists (www.apaws.org), an organization of professional pooper-scoopers, founded the week in 2002 to educate pet owners on the importance of cleaning up after their dogs.

The doggie doo-doo is big business – estimated in the tens of millions of dollars -- and more people are stepping in it every day with new dog poop-related products. Rochester, N.Y. high school teacher Kristin Elliott is one such entrepreneur that has sold more than $100,000 of a product she calls the Doodie Pack -- essentially a doggie backpack that carries the bag of Fido’s poop.

Elliott is a mother of three girls, and said she had an idea about dog poop and was moved to do something when one day walking her own dog. “I watched a mother holding her crying baby on her hip, a dog on a leash in one hand and a bag of dog poop in the other hand which was being flung around hitting her and the baby while she controlled the dog and pushed an empty stroller.

“My philosophy is that it’s every dog owner’s duty to pick up their dog’s doodie, but it’s the duty of the dog to carry it. Doodie Pack allows the dog owner to put the doodie away in a pouch on their dog’s back until the owner could properly dispose of it.”

Elliott’s idea has translated into a fast growing cottage business for her. While Doodie Pack is being heralded by customers as a practical and utilitarian there are hundreds of poop-related products on the market --- with some of them best described as zany and bizarre. 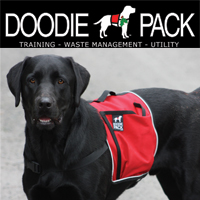 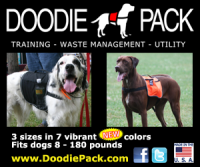