Baking enthusiast and author Tracy Falbe revived a lost family tradition when she discovered her grandmother’s handwritten recipes from the 1920s. Complete with fruitcake recipes, the old notebook has become a vintage recipes cookbook.

Battle Creek, MI -- (SBWIRE) -- 12/02/2013 -- Like many people Tracy Falbe used to consider holiday fruitcakes to be a joke dessert that no one wanted to receive. Her opinion changed drastically when she uncovered a recipe notebook handwritten by her late grandmother Edna Oldershaw Irwin that was started in 1926.

A fruitcake recipe that her grandmother had labeled “2 delicious loaves” caught Falbe’s eye. It was filled with dates, raisins, nuts, and candied fruit and heavy on cloves.

“I was genuinely surprised with how good the fruitcake was. Everyone liked it, even my kids. The spiciness and the sweetness really complemented each other,” Falbe said.

“I was always turned off by fruitcakes before because those colored candy fruits in them look weird to me, but I was wrong,” she added.

Although fruitcakes are traditionally dried and then soaked in spirits or wine, Falbe baked and served the fruitcake fresh at Christmas and plans to do so again this year. “My dad said his mother used to bake fruitcakes in August, wrap them in cheesecloth and leave them until the holidays. I’m not sure if I’m ever going to do that. The fruitcake was delightful on day one,” she said.

Falbe’s grandmother Edna grew up in Chatham, Ontario and later immigrated to the United States in the 1930s. Her recipes reflect the regional character of Canadian foods from that time with an emphasis on sugar, molasses, dried fruit, nuts, and apples.

Vintage recipes have value to budget-conscious cooks today because most of them need only a handful of ingredients. “In generations past people had to stock their pantries with a few essentials and then get creative so they could have a variety of dishes. I think vintage recipes can be quite helpful to people with frugal lifestyles,” Falbe said.

She spent months from December 2012 to April 2013 salvaging and testing recipes from her grandmother’s notebook so she could publish it as a cookbook. The result in June was the release of My Grandma’s Vintage Recipes: Old Standards for a New Age now available worldwide in paperback and ebook. Falbe has been a novelist and publisher for years and publishing a cookbook of her family’s vintage recipes was a natural choice.

“It’s actually very convenient for me to have the paperback in my kitchen and the digital version on my tablet. The original notes are too delicate for me to keep using on a day-to-day basis,” Falbe explained.

The ebook of My Grandma’s Vintage Recipes is available in multiple formats worldwide at Falbe Publishing. Additionally it is available in paperback and ebook formats at major retailers like Amazon and Barnes & Noble.

About Falbe
Falbe is also the author of The Home Canning Guide for Everyone Who Eats and the novels Union of Renegades, The Goddess Queen, Judgment Rising, The Borderlands of Power, Rys Rising, Savage Storm, New Religion, Love Lost, and Werelord Thal. Her work is sold worldwide at numerous online retailers. 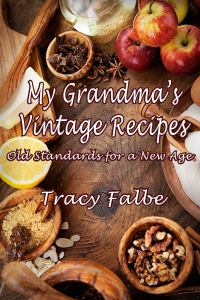 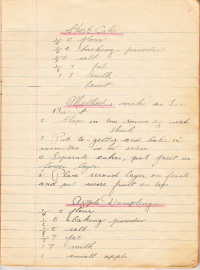