San Pedro, CA -- (SBWIRE) -- 08/21/2015 -- Recent studies by Schoenwetter Supplements, LLC, has found that the RxQ Antioxidant Complex,  helps in providing additional antioxidant supplements required by a human body on a daily basis. The users of the product are reported to react better to the oxidative stress like sun exposure, radiation, air pollution than the non-users and said to be less irritable to dust, allergies and UV rays from the sun.

When contacted, Dr. Schoenwetter, the founder and chief contributor in the development of the product, said, "We are really happy with the initial reports with many of users showing positive effects from the use of this formulation. What's unique about RxQ Antioxidant Complex formulation are functional antioxidants that have additional properties that are not only to help protect and quench free radicals, but can also have an age reversing effect." Some sources also believe that the formula helps in developing cognitive memory and even have mood enhancing effects.

About Dr. Schoenwetter
Having born in Marin County, California, Dr. Schoenwetter has been a household name in San Pedro since 1980. He graduated from La Universidad Autonoma de Guadalajara in 1974 doing post graduate work in Nuclear Medicine and Family Practice at Dalhousie University in Halifax, Nova Scotia, Texas Tech University at El Paso, Texas and NRMC Oakland, California. He has also served as  DESRON 36 destroyer squadron physician in the US navy. Schoenwetter is credited for his major contributions in the field of nuclear medicine with RxQ Antioxidant Complex, being one of them.

* Disclaimer:  The statements and information contained in this press release have not been evaluated by the United States Food and Drug Administration (FDA).  The products featured in this news release are not intended to diagnose, treat, cure or prevent any disease. 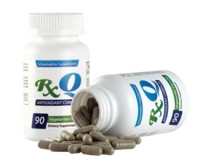