Provincetown, MA -- (SBWIRE) -- 07/08/2013 -- Varla Jean Merman (aka Jeffery Roberson) has been the acknowledged entertainment Queen of P-town for the past decade. Each summer brings the anticipated premiere of her latest, original and irreverent music-comedy show – a summer-long ‘hot ticket’ every year. After a typically busy year starring to critical acclaim as the title roles in the original musical comedy farces Mildred Fierce in Boston and Scrooge in Rouge in New Orleans, as well as in Menotti’s opera The Medium in New York, Varla returns to P-Town to premiere "Twice Upon A Mattress…Will My Prince Ever Come?" at The Art House from July 1 – August 31, with MRF at the piano. For tickets please visit www.ptownarthouse.com

In the new show, the artist explains, “Varla gives the mother of all gooses to everyone's favorite fairy tails. After years of kissing frogs, toads and other slimy creatures, Varla is tired of trying to make her prince come. Should she toss it all aside and embrace her inner Evil Queen? With Grimm stories, a castle's worth of couture and a libido that could wear out seven dwarves, this Ambien-addled Sleeping Beauty is wide awake and ready to give everyone a happy ending!”

2010 Elliot Norton Award Winner, Roberson’s Varla Jean Merman has been featured on television as a guest on TV’s Ugly Betty and on Bravo’s Project Runway Season 5 as the winning model for the show’s drag challenge. Other TV credits include his network television debut on All My Children in the recurring role of lady of the evening Rosemary Chicken, HBO’s Dragtime, E!’s Fashion Emergency, E! Goes to Cannes, MTV’s True Life: Mardi Gras, Francesca Page with Rossy DePalma, and has most recently appeared as Varla Jean on Logo starring in shorts for “Drag History Month.” He shared the Outfest Film Festival “Best Actor” Award and the Aspen HBO Film Festival “Best Actress” Award with his costars Jack Poltnick and Clinton Leupp for his featured performance in the cult classic film Girls Will Be Girls (Sundance 2003) directed by Richard Day. This past January he filmed the sequel entitled Girls Will Be Girls 2012. When Varla (aka Jeffery Roberson) starred opposite Leslie Jordan spring of 2012 at the Little Shubert Theatre, the New York Times wrote “If Carol Burnett and Harvey Korman had stood in front of the right pair of funhouse mirrors, they might have resembled Ms. Merman and Mr. Jordan in stature as well as comedic talent.” He also played the role of Mary Sunshine in the revival of Chicago on Broadway and appeared at the Long Wharf Theatre in Hartford Stage’s production of The Mystery of Irma Vep directed by Michael Wilson performing the roles originally made famous by Charles Ludlam.

Jeffery as Varla Jean has filled concert halls and cabarets across the world including the Sydney Opera House, Carnegie Hall, the Public Theater, London’s Soho Theatre, LA’s Renberg Theatre, and San Francisco’s Victoria Theatre. He was the opening act of Vienna’s LifeBall, the largest fundraiser for AIDS research in Europe, where he shared the stage with Sharon Stone and Catherine Deneuve. His many Fraktured Classiks productions in New York include The Mailman Always Comes Twice, Screen Door and CAGED! with Lily Tomlin, Joan Rivers and Isabella Rossellini, Lypsinka is Harriet Craig, The Miracle Worker (with Charles Busch) and Varla Jean Merman is The Bad Seedling. Recent engagements also include the title role in Auntie Mame, Scrooge in Rouge, Ricky Graham’s production of Irma Vep at Southern Rep/Le Chat Noir, his recent solo show Varla Jean’s The Loose Chanteuse featuring Tom Judson, which ran in Provincetown, LA, New York and New Orleans, and last summer’s Topping Myself, which sold out its summer run. 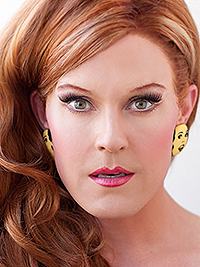