Detroit, MI -- (SBWIRE) -- 12/05/2012 -- Now in stores is the horrifying new album, "Venus Flytrap", from legendary Detroit hip-hop provocateur, Esham. Featuring 31 songs, Esham's ultra-dark blend of shape shifting narratives channel visions of despair and mayhem in the Motor City's decaying underworld. Demonic trap music, suicidal soul samples and merciless waves of bass anchor a collection of black hearted bangers that will not be spreading holiday cheer this December. Instead, Esham devilishly draws listeners into his Mecca of debauchery and sugarcoats nothing as he hopelessly circumnavigates hell on earth.

Esham is considered to be one of the most prolific artists in the history of rap music and Venus Flytrap is his 34th and final studio album. Since 1988, he's served as the cornerstone of Detroit's hardcore hip hop scene and is credited for the creation of the "acid rap" subgenre (a vicious mutation of gangsta rap where terrifying urban lore, anti-organized religious themes and drug infused, sexploitation rule). While rappers made millions glorifying themselves as drug kingpins, pimps and killers, Esham is known for his more unconventional approach: Exploring new ways to kill himself on wax.

His ongoing defiance of the music industry includes feud's with Eminem, Kid Rock, Royce 5'9" and Insane Clown Posse that have left his career laughably ostracized. Too explicit for the byzantine rules of radio and MTV, Esham's unabashed honesty as not only an artist, but as an ex-record label CEO, recklessly stabs at competitors and authority. As a career underdog, Esham has shunned major label deals and instead used the ruins of Detroit as the backdrop for his self-made videos. His ferocious DIY, "open source", recording strategy continues to delight his cult fans who celebrate his crafty ability to go pound for pound against artists with much larger budgets and exposure.

Venus Flytrap is now available on CD at FYE, Best Buy and most independent retailers in the U.S. Digital is available on iTunes, Amazon, Google Play and Soundcloud.

For more information on Esham, please visit http://www.acidrap.com or http://www.facebook.com/eshamacidrap.

Stream the entire album for free now at: http://soundcloud.com/aknumedia/sets/esham-venus-flytrap 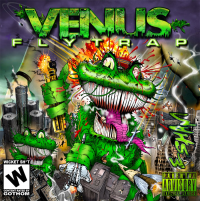