Eames Lounge Chair Will Not Be a Thing of the Past: It's Sturdy, Credible and Adapts with the Modern Trends

The Eames lounge chair was the first chair that the Eames designed for a high-end market. Its first release turned out to be a big hit. Considering the fact that back then, they rely so heavily on selling office and institutional furniture to Fortune 1,000 companies and government agencies.

Toronto, ON -- (SBWIRE) -- 08/11/2014 -- Typically, the Eames Lounge Chair and ottoman are fixtures made of molded plywood and leather, the product of the creative intellect of Charles and Ray Eames, exclusively made for the Herman Miller furniture company. Samples of these furnishings are showcased and are part of the permanent display collection of New York’s Museum of Modern Art.

Since its debut on the Arlene Francis Home Show, the chair has been in continuous production by Herman Miller in the United States, and later entering and dominating the European market through Vitra and in cooperation with Fritz Becker KG, a German furniture market. Later on, Chinese and other European companies began making clones of the luxurious chair; however Herman Miller and Vitra remain the only two companies to carry the Eames tag in the production of these chairs.

It is evident that Eames Lounge Chair will not be a thing of the past, for these chairs are marketable whether they are newly produced or ones that can be considered antique. In fact there is a booming market for used Eames chairs. Some collectors are willing to pay high prices for earlier chairs made with Brazilian rosewood veneer, which is no longer available due to a worldwide embargo since 1992. The price for these original rosewood chairs reached as much as $7,000 in auction.

The Herman Miller Company realized that time has a changed and it’s about time to enter the mainstream market. “We realized if we don’t do something, we are going to be left behind in a shrinking pie,” Walker stated during the company’s investor presentation dated July 31st. “How do we follow [the consumer] through [the] day?” he added.

The said company is seeking growth outside of its fundamental business as governments have cut budgets and as mobile devices alter the way people work and utilize office equipment and furniture. And is planning to enter to enter the home furniture market for it is to 10 times the size of the office of what they are known for – the office furniture. Also, Herman miller viewed as a less volatile segment.

If one wish to have to own this luxurious chair but doesn’t have the fund to afford so, there are a lot of companies that produce Eames Lounge chair replica. They may not have the “Eames” tag, but somehow that are able to give that luxurious vibe. Barcelona Designs is one the companies that reproduce this chair making it available to the masses.

About Barcelona Designs
Driven by their mission to share the benefits of high quality designs at affordable prices paired with exceptional customer service, Barcelona Designs has become the leading supplier of modern, contemporary furniture based on classic designs. Barcelona Designs’ exemplary portfolio includes lighting, indoor & outdoor furniture as well as an office furniture range. Offering superior quality products, competitive prices and expedited delivery from their fulfillment center in the United States. The company’s Barcelona Reproductions are crafted from superior quality Italian leather, wood & material and available in a variety of colors, finishes and textures. They work hard to provide their clients with popular modern styles from the most renowned designers. 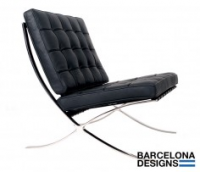 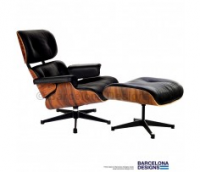 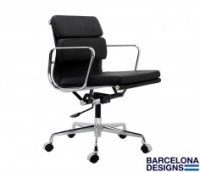