eBay and Amazon Aren't the Only Places to Make Money, Look Locally

New book explores how to buy under $1 and sell for $10 at home and on eBay, Amazon and other Internet sites.

A new book by Eric Michael, creator of the popular Garage Sale Academy website (http://www.garagesaleacademy.com), looks at eBay and other websites, as well as tried and true ways to make good, steady and reliable money by finding, aquiring and selling many different kinds of items. The book is called Almost Free Money. In a world full of books about get rich quick marketing schemes, Almost Free Money is a refreshing and honest look at ways to make money during tough times through methods that probably go back to the first time someone made good in a horse trade. But Almost Free Money also takes into account the Internet Age - eBay, Amazon, etc. - in an forthright analysis of how selling on the Internet works and doesn't work. The book's selling strategies do not just limit themselves to the Internet, teaching how to pick and choose what to take to eBay, Amazon and other sites and what to sell locally.

Ten years ago Eric Michael put into action a simple idea that had come into his head. He decided to poke around his neighborhood and see what he could find for free, or what he could buy for $1.00 or less, and see how much of that stuff he could sell for $10.00. Then he refined his process by asking questions. What sells better on eBay vs Amazon? What can sell better locally than on eBay or Amazon? What sells better to a dealer than at a garage sale? Ten years later Eric Michael supports his family with an income made from practicing and continually refining the idea he first tried out a decade ago, by buying under $1 and selling on eBay, Amazon or other sites and selling locally.

Now he shares his buying skills, his eBay and Amazon selling skills, garage sale and negotiation skills in Almost Free Money. In it he breaks down both methods of finding goods, and how to categorize the found goods for sale on either eBay, Amazon, or at a garage sale at home or to a local dealer. Readers benefit from ten years of Eric Michael's experience and analysis. The book has four appendices containing lists of easily found items and suggested purchase prices (or how to find them for free) and lists of the best places to sell various types of items and what kind of selling price to expect.

Eric Michael has been making money finding free stuff, or items for which he pays less than $1, and selling them on the Internet and other venues at an average price of $10.00 each. He is the creator of the popular website Garage Sale Academy, which offers a buying and selling forum and access to further tips to develop buying and selling skills. 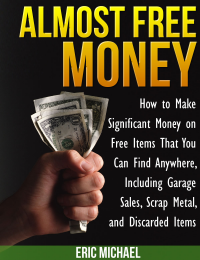 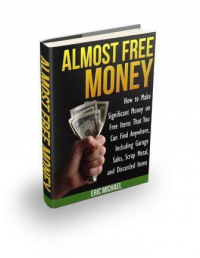