“We welcome Eifel National Park into the elite roll of International Dark Sky Parks and commend their exceptional public outreach efforts in the surrounding areas,” said IDA Executive Director Bob Parks. “The creation of Germany’s first International Dark Sky Park, coming so soon after the announcement of its first Dark Sky Reserve, shows a growing interest in night sky conservation that Germany and all of Europe can be proud of.”

Eifel is the first and only German National Park in the Federal State of North Rhine-Westphalia. It is also one of the youngest in the German National Park system, created in 2004. Eifel covers 110 square kilometers (42 square miles) of territory in west-central Germany near and along the Belgian border.

Today’s announcement is the result of efforts by park leadership and neighboring communities to enact good outdoor lighting policy and promote stewardship of the dark night skies through continued education and public outreach efforts. Its “provisional” status means that full certification within the International Dark Sky Places Program is contingent upon achieving better than 90 percent participation among communities in the National Park by 2017.

Eifel National Park Superintendent Henning Walter believes the IDA designation will have a significant impact well beyond its borders. “It will let many people encounter the value of a starry night sky and a natural nightscape with its animals,” Walter explained. “I hope the IDA award will further motivate neighboring communities to reduce light pollution.”

Bright Lights, Big Cities, Dark Skies
Eifel National Park is situated in one of the most densely populated parts of Western Europe; nearly 20 million people live within two hours of Eifel by car or train. Despite the encroachment of modern urban development, the park is a dark sky oasis surrounded by a sea of light. The Park’s location near major population centers such as Aachen, Bonn, and Cologne presents a special challenge in preserving this fragile natural resource.

The effort to save Eifel’s dark skies was led by Harald Bardenhagen, CEO of Astronomie-Werkstatt “Sterne ohne Grenzen,” an astronomy education institution. Dubbed the “Star-Warrior of Cologne” by local media, Bardenhagen took on the monumental task of convincing dozens of communities in and around the park that restrictions on outdoor lighting would protect the National Park without threatening their safety and security.

“The implementation of a dark-sky protection area in densely-populated parts of Europe is challenging,” Bardenhagen said. “For this task one does not only need spirit and enthusiasm to promote dark skies and the value of a nightscape without light pollution. One also needs to demonstrate the advantages of illumination alternatives to address the broad range of problems caused by artificial light at night such as energy waste, greenhouse gas emission, and potential harm to human health and biodiversity.”

A New Life From An Old Past
Eifel National Park has retained its dark night skies because much of its territory was literally off-limits until a decade ago. In the period following the Second World War, parts of what is now the National Park were designated the Vogelsang Military Training Area and used by the Belgian armed forces for training activities. Wollseifen, the only settlement within the Vogelsang Military Training Area, was evacuated and destroyed. Closed to the public, the land gradually returned in parts to its former natural condition over the six decades until the National Park was established when military activities in the area ceased.

Previously, the Eifel region was chosen for the site of Ordensburg Vogelsang, an estate developed for the education of selected Nazi party officials. The 100-hectare (250 acre) complex was built in 1934-36. In 1950, the Belgian Armed Forces took over the site, known as “Camp Vogelsang” until 2005. It is now operated as the “vogelsang ip International Place in Eifel National Park” (vogelsang ip).

200,000 visitors now enjoy leisure and educational activities there each year; according to vogelsang ip CEO Albert Moritz, options include nighttime stargazing, nocturnal bat observing, and ranger-led night walks. “We have had extraordinarily positive experiences with these activities. It has encouraged us to prevent light pollution and include the night sky as a tool in our curriculum of learning for everyone,” Moritz said.

Local officials hope the IDA designation will bring new opportunities for tourism and economic development to the region, as well as helping to improve the overall quality of life. “The preservation of a natural night is very important for our city,” explained Bert Züll, mayor of Heimbach, a gateway city to the National Park. “It will enhance the quality of living for our citizens and furthermore will offer a unique touristic value for our guests – the experience of a natural nightscape.”

Future plans for the area include an eventual expansion of protected territory into the Hohes Venn region across the border in Belgium to create an International Dark Sky Reserve spanning both nations. 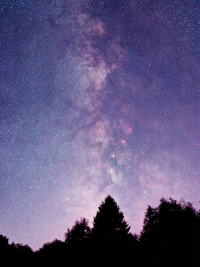 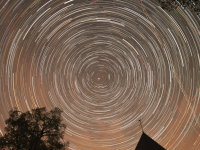