Free Portion of the Popular EBook, "How to build a 50 MPH Electric Bike" Being Offered for a Limited Time

Vancouver, Canada -- (SBWIRE) -- 08/26/2011 -- There’s a new form of bicycle that’s hitting the streets. It’s called the electric bike, and its rise in popularity has been explosive over the last several years.

For those who own them, electric bicycles are an obvious alternative to cars or motorcycles. While car and motorcycle owners have to sit in traffic and abide by strict laws, electric bikes are virtually unhindered. They can be ridden anywhere a regular bicycle can, and they can be as fast as (if not faster than) a high powered electric scooter. Best of all they are environmentally friendly, and with the right knowledge in hand, they can be transformed into rockets with pedals.

Consumers are met with many options when first setting out to purchase an electric bike. Unfortunately however, most of those options consist of low quality bikes mounted with weak motors and ineffective batteries. In an industry that has not yet quite gained its footing, high quality bikes that deliver massive power are extremely hard to find.

Answering the recent demand for high quality e-bikes, Greg Davey has recently released his EBook that takes users through the step by step process for building their own 50 MPH electric bicycle.

“After two years of research and testing I have finally finished this detailed manual so you can learn how to build your very own electric bike,” says Mr. Davey.

According to past students, the EBook cuts through all the fluff and gets straight to the core of how to build an e-bike. “It’s difficult to tell that Greg isn’t a professional mechanic,” says Mark Pissarro of Tempe, Arizona. “He provides in-depth descriptions for every element a high quality electric bike needs. He shows you how to get the most for your money and build a custom electric bike that will blow every other electric bike off the road.”

This sentiment seems to be shared by everyone who has downloaded Greg’s course. In fact, he is so confident in his tutorial that he is offering the first portion of his EBook absolutely free for the first takers. He believes that once people see how easy it is to build a super fast electric bicycle, they’ll jump at the chance to build one for themselves.

To learn more about the EBook “How to build a 50 mph electric bike,” or to grab the first portion of the book for free, please visit: http://www.fastelectricbike.com/ 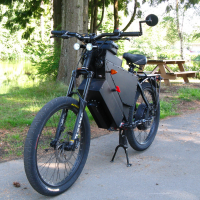