Written by William Bunting, ‘Tip of the POTUS Spear: The Complex’ is the first in a new series which explores the all-too-real scenario of radicals targeting the United States through acts of extreme violence. Introducing his characters, United States Navy SEALs Scratch and Roach, Bunting uses his real-world knowledge of the military to craft a suspenseful, raw and intelligent thriller.

Newmarket, NH -- (SBWIRE) -- 01/17/2014 -- Most people cannot remember a time when the United States didn’t live beneath the shadow of the threat of terrorism.

Author William Bunting is no different, and through his own experiences traveling and working across the Middle East, North and South Americas and Europe, Bunting has become privy to the darkest corners of the world, where greed and exploitation take precedence over peace.

‘Tip of the POTUS Spear: The Complex’ is the first in Bunting’s upcoming series of novels depicting two Navy SEALs as they navigate today’s politically-charged and nightmarish environment, coming up against extremist ideals and corruption. “The book is very entertaining but also very realistic,” says Bunting. “It has that feeling of being ‘pulled from the headlines’, as it deals with the targeting of commercial airliners and SEALs being killed in action.”

In Yemen, Navy SEAL Team Ten is ambushed on a mission to capture or kill an American-born Islamic extremist. All members of the team are presumed killed in action.

Back in the United States, ten domestic flights go down, the work of an apparent terrorist attack. In one of fate’s crueler tricks, the family of one of the missing SEALs is on board.

Both events were orchestrated by the military industrial complex, a mix of industrialists and Pentagon officials who rely on war to increase their profits, military ranks, and power.

The heads of the MIC made one small misstep. Not all of Navy SEAL Team Ten died in Yemen. Two survived, and one just lost his family to the MIC’s treasonous acts.

SEALs Scratch and Roach are on their way back stateside, and they’re looking for revenge. Someone’s about to face ‘Tip of the POTUS Spear’.

For the author, his own knowledge came to the forefront while writing the book. “What a lot of people don’t know is that currently Navy SEALs and Army Rangers have an extremely short chain of command from The President to the Chief of the CIA and finally through the commander of the Joint Special Operation Command. This sidestepped the Secretary of Defense on through the Naval chain of command to the actual Team that would perform the military task called for.”

Continuing, “What I’ve done with this series of books is to shorten the chain of command from The President directly to the ‘Tip of His Spear.’”

Bunting’s research was specific and wide-reaching. “It was vital to me that readers would feel they were being swept along with the writing and not questioning whether or not something was realistic. The book will immerse readers straight into the action and also include up-to-date historical events throughout the world. The intelligence gathering, equipment used, places depicted and circumstances encountered are actual facts woven into a modern day fabric of fiction.”

The novel will be available from Amazon.com and the Kindle Store.

About William Bunting
William Bunting is a graduate of Rensselaer Polytechnic Institute. His lengthy career as an Architect has allowed him to travel the world for work and pleasure. A lifelong Bostonian, he currently resides in Newmarket, New Hampshire with his family. He was drafted into the Vietnam ‘Police Action’ where he became acutely aware of the foolhardiness of all wars. His travels provided him a clear understanding of the positive potential of humanity against the backdrop of the powerful and sometimes dark ‘circumstances’ surrounding the Military Industrial Complex. 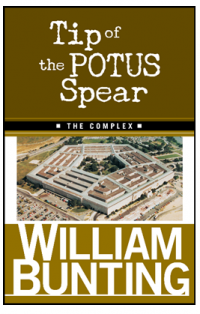