The electronic music artist LeanDro is proud to announce that he will be performing live at the Full Moon Further Campout Celebration in Owensboro Kentucky on April 27, 2013.

Los Angeles, CA -- (SBWIRE) -- 04/26/2013 -- LeanDRO is an electronic music project that consists of smooth melodies and grimy BASS lines, with the addition of a live guitar. When asked about his style of music, LeanDRO said, “my music is dedicated to fighting the norm and making music that just sounds good, regardless of what seems to be the mainstream”.

While developing his musical style LeanDRO coined the genre DROstep, which is a play on dubstep, by keeping the traditional drum beats of dubstep, but maintaining a more open range of versatility. LeanDRO brings an engaging presence to the crowd with his soulful beats and raw energy. LeanDRO’s usual show circuit includes being booked in Louisville, Nashville, and eastern US cities, and has played at notable venues such as Nashville’s 12th and Porter and Louisville’s Diamonds Music Hall. LeanDRO has graced the stage with such artist as electronic jam band The Malah and dub step power hitter Crizzly.

Regarding the upcoming Full Moon Further Event LeanDro said, “I’ll be playing early saturday night, make sure you come out get your mind right, ill be playing funk to get your feet shakin’.”

LeanDro is an artist that is dedicated to his listener’s enjoyment. He said, “I learned how to play guitar because music pushed me through some tough times. When I went to my first EDM show, I realized the impact and joy people receive from these shows. This inspired me to start producing beats so that when people listen to my music they can forget about their troubles for that moment, and just have an awesome time with no worries. Music seems to be one of the only things that bring people together for the purpose of happiness, and that’s what I’m all about." Currently, LeanDRO is not into selling his music and said, “I currently am not selling my music, and plan on keeping digital freedom by allowing my music to be downloaded for free.”

Please make sure to check out one of LeanDro’s live upcoming performances. He is also scheduled to play at The Twisted Tap in Bowling Green, KY on April 25th. For ticket information and more details, please visit his website at: http://www.reverbnation.com/leandro9 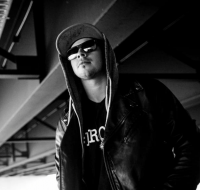