Brooklyn, NY -- (SBWIRE) -- 06/17/2014 -- Only 4,500-7,500 snow leopards remain in the wild of central Asia. Living in the rugged, forbidding mountains, these endangered, elusive cats continue to be threatened by the humans sharing their land. Conflicts with traditional livestock herders have escalated sharply in recent years, resulting in retaliatory killing of snow leopards. From the Himalayas north to Siberia, herders are especially angered by surplus killing that occurs when a snow leopard enters a corral and kills up to 50 or more of the confined sheep and goats. In a very real sense, such livestock represent each family’s primary “bank account.”

The Snow Leopard Conservancy, rooted in founder Dr. Rodney Jackson’s nearly 35 years of dedication to saving snow leopards, was the first to create predator-proofed corrals to save livestock from being killed by these cats, in turn saving the lives of the cats themselves. However, while such corrals can be physically predator-proofed (by constructing sturdy walls and roofing), the cost of obtaining the needed materials (wire-mesh, sturdy fence-posts, etc.) is high, especially in the Himalaya where all supplies have to be transported by horse or yak in light of its difficult terrain and few roads. It could cost USD $3,000–$5,000 to predator-proof a pen large enough to contain animals belonging to as few as 5-20 households. The use of solar-electric fencing offers some savings, but predator-proofing the many thousands of night-time pens -- even only those within select parts of the snow leopard’s vast range -- would be prohibitive. Therefore, Snow Leopard Conservancy has started trialing less costly interventions for addressing this important threat to the long-term conservation of snow leopards.

Electronic predator deterrent devices could be the solution we are looking for. Initial trials in Mongolia, India, and Nepal have been encouraging. Livestock herders are feeling confident leaving their animals in enclosures protected by the devices overnight while they go home to their families. Near one corral in Nepal, herders found tracks of a snow leopard in the morning, but the cat didn’t come close enough to enter the enclosure.

Predator Guard deterrent lights use smart technology to produce a repeating, intermittent flash of twin lights that to wild animals appear to be the eyes of another predator. To a snow leopard, these lights are threatening or confusing and make them stay at a distance. During the day, the Predator Guard lights charge via solar panels then automatically turn themselves on as night approaches, thus making them very easy for the herders to use. At only about $25 per device and no need for batteries, the units are a cost effective way to protect the corrals. Also, because each unit is quite small, they are fairly easy to ship and transport to the remote locations where they will be used.

Snow Leopard Conservancy looks forward to continuing the testing of electronic deterrent devices such as Predator Guard to determine if these can become a long-term solution or if the cats will become habituated to seeing the lights over time. If trials are successful, Predator Guard will be helping the Conservancy continue to promote a safe, meaningful co-existence between these magnificent cats and the local people who share the same land.

To learn more about Dr. Rodney Jackson and the work of Snow Leopard Conservancy, please visit our website at www.SnowLeopardConservancy.org or find us on Facebook. 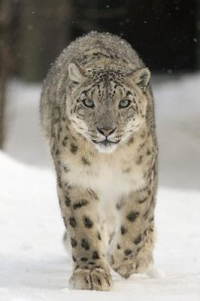 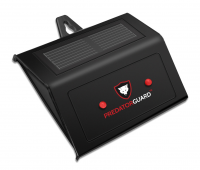