Ellington and Associates Is Pleased to Announce That Dr. Nataliya Tur Has Joined Our Staff as a Senior Paleontologist

Houston, TX -- (SBWIRE) -- 09/23/2013 -- Since joining Ellington and Associates, Nataliya has been working to refine the biostratigraphy of the Cretaceous Eagle Ford Formation in Texas, analyzing its foraminiferal assemblages in well cuttings and thin-sections.

She has worked for the last 15 years as a Senior Researcher at the All Russian Geological Institute in St. Petersburg, Russia.

Her specialties include biostratigraphic analysis of Upper Cretaceous Sequences based on foraminiferal species distributions and quantitative analysis of species assemblages in paleoecological reconstructions.

She has worked on the biostratigraphy of the NE Caucasus, Crimea, Central Russia, and the Baltic region. Nayaliya did post-doctoral research at the Smithsonian Institution interpreting planktic foraminiferal assemblages in ODP core samples from the uppermost Cretaceous of the Blake Plateau to create stratigraphic-age models, estimating sedimentation rates, and describing the planktic foraminifera mass extinction at the Cretaceous-Tertiary boundary. 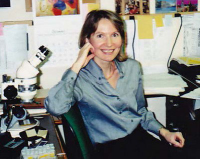