Los Angeles, CA -- (SBWIRE) -- 01/17/2014 -- From a city of strip malls and a coffee shops, comes Nicholas Freeman's PRIMAL series. Freeman, an up-and-coming photographer and Los Angeles native, creates a powerful series of images that are a wild contrast to the landscape they come from. A woman, covered in only a coyote pelt, stretches her body out in Southern California's high desert. In the crashing waves off the coast of Malibu, a young man holds two octopuses out triumphantly. And, a girl lies curled in a bathtub, her body forming an S shape, her gaze pointed directly at the camera above while a dozen fish swim around her. Freeman's images, all of which feature a human subject paired with an animal motif, are a study and an exaltation of the human body.

In some of the images, the connection between the human and the animal are clear, like the woman in the coyote pelt, while others require many viewings before the connection is clear, like the girl who sits in sea foam while her fingers grip the between the teeth of a terrifying alligator skull. But, it was his duotone photograph of a strong young black man holding massive elk antlers over his shoulders, that triggered the idea behind PRIMAL. In the photo, the man stares right at the viewer, his eyes challenging them to look away.

"I want my work to affect people, to make them feel," Freeman says. "If I can connect with people, to pull a feeling or thought out of them, for even a moment, then I have accomplished my goal.”

Freeman’s fine art series, is currently seeking funding through Kickstarter. Launched on January 6, 2014, the PRIMAL fundraising campaign received 20 percent of its initial funding goal in just four days and reached the number 3 position in Kickstarter’s popularity rankings. He's now eyeing his stretch goals: gallery shows in Los Angeles and New York. Rewards include copies of the fifty plus page book and a chance to appear in PRIMAL. Freeman intends to use his Kickstarter to take his series beyond Los Angeles, to shoot on the salt flats in Utah and the snow-covered forests in Washington State.

Nicholas Freeman's Kickstarter campaign for PRIMAL ends on February 10th at 11:59 am PST.

About Nicholas Freeman
Nicholas Freeman studied photography in the painstaking way many of his peers have only read about in textbooks: with a 4 x 5 camera, sheet film, and a dark room. Since breaking out on his own after apprenticing for prominent fashion and celebrity photographer Dominick Guillemot, Freeman has risen quickly in the competitive world of professional photography. His schedule is filled with shoots for both individual clients and Fortune 500 companies (the names of which remains confidential per his contract). After just three years as a member of the American Society of Media Photographers, he now sits on the local board of directors. For more information about PRIMAL, visit: http://www.kickstarter.com/projects/nicholasfreeman/primal-a-fine-art-photo-series-and-book 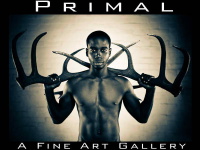