Hardworking 19 year old from Maine who's known for tirelessly dispensing fun facts and jokes at every turn shows his friends that it pays to be lazy. New eBook is a MUST read for the Amazon Kindle and Kindle Fire.

Springvale, ME -- (SBWIRE) -- 02/21/2012 -- Tyler Camire of Springvale, Maine is no slouch by any stretch of the imagination. But that is not stopping him from declaring himself, "World's Laziest Person".

What started out as a love for all things fun has evolved into a passion for recording "cool and interesting random facts", as he puts it, on his computer after researching these little tidbits for his friends and co-workers pleasure. "I love short, concise random facts." He says, "But I noticed every single fun fact book I had ever seen is all the same. Nothing unique at all except maybe a few facts I hadn't seen yet." Often times these same fun or random fact books contained the same information peppered throughout, had terrible spelling, or commonly found facts in most of them. Tyler thought maybe he found the solution. Why not put together a quality book himself and name it something a little different to stand out from the rest?

Relying on his natural wit and sense of humor, Tyler compiled his facts into a book called "1000 1/2 Random Facts 'Cause I Was Too Lazy to Write 1001". "When I came up with the title, I swear I giggled for hours because I thought it was so funny. Is that a catchy title or what?" To solidify his humorous title, Tyler wrote a playful introduction which embodies a personality that is both very much himself and one that is not so much.

"I am far from a lazy person but why not make myself out to be that way for the sake of a few laughs? That's just my style!" Tyler decided to publish his completed work as Kindle book on Amazon.com to see how it would do and maybe give some readers a refreshing take on a familiar genre. Turns out, the response from readers proves he was on to something. "People have been very positive about my book. The high rating I've received since putting it on sale says it all." As for his views on some people mistaking him for a truly lazy guy..."Hey, if it puts a little joy in a person’s life then I will be the first to say I am the King of Couch Potato Nation!" "1000 1/2 Random Facts 'Cause I Was Too Lazy to Write 1001" Can be found on Amazon's Kindle Store. 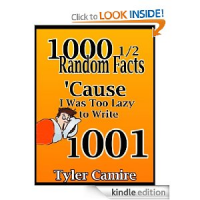