Vernon Hills, IL -- (SBWIRE) -- 08/21/2013 -- Allen Vaysberg is on a mission to show people how to "live their true essence." Through his radio show, speaking engagements and personal coaching, people looking to find meaning and balance in their lives connect with Allen to help them find that balance that is crucial for happiness. Vaysberg is releasing a series of multi-media works of prose and poetry to help people "re-calibrate" their lives.

While a book of poetry may seem somewhat abstract to those looking for a logical path to success, Vaysberg's first book titled "Inspirer" uses poetry to focus on the experience of finding out what success lacks when it has arrived unbalanced in one's life.

His own life illustrates his approach to balance. Vaysberg moved with his family from the Ukraine to the US when was 14 years old. He had many successes as an IT entrepreneur and consultant, helping build several multi-million dollar businesses. He had all the things that make the American Dream.

He says of the limitations he found in success as an IT entrepreneur, "The big lesson I had to learn is that in order to live a fulfilled life, I needed to pursue my soul's purpose." His book already has drawn acclaim from other entrepreneurs and authors. International best-selling author Jaden Sterling, author of "The Alchemy of Success," says Vaysberg's book is, "a diverse work of poetry that is revealing and funny," adding, "Allen skillfully communicates his heart felt messages truthfully." Tom T. Moore, speaker, entrepreneur and author of "The Gentle Way," says of Vaysberg's writing, "There's an old saying, to write about what you know, and that's exactly what Allen does, giving us a glimpse at his life, his loves, his desires, and his spirituality. It's a true cornucopia of one man's life. Enjoy the voyage!"

"Inspirer" will be just the beginning of Vaysberg's offering. In the works are more inspirational books, children's book, card decks, and a science fiction series.

For more information about "Inspirer" and about Allen Vaysberg's work, visit http://www.allenvaysberg.com

For information on coaching to "Re-calibrate Your Life," visit:  http://allenvaysberg.com/recalibrate-life

About ALLEN VAYSBERG
Allen Vaysberg is a poet, lyricist, author and actor. He received certification as an intuitive by well known "angel therapist" Doreen Virtue. In his coaching work he strives to show people how to find balance and meaning at various stages of their lives. His services are available to individuals and corporations. "Recalibrate Your Life with Allen Vaysberg" is his aptly named nationally syndicated radio show. 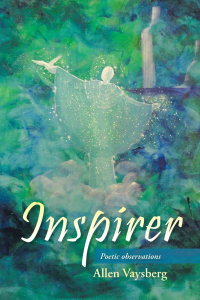