Teton Village, WY -- (SBWIRE) -- 01/06/2016 -- The New York Times January 1, 2016 exposé details how CDC officials retracted warnings about cell phone radiation based on information retrieved as a Freedom of Information Act (FOIA) request. As a public service, Environmental Health Trust (EHT) is posting, obtained as part of the FOIA request, detailing how the cell phone industry directed changes in the CDC website content. These documents detail how information on the risk to children's health was deleted, information on cell towers never saw the light of day and a scientist well known for affiliations with the wireless industry came on as a consultant to the CDC.

At the behest of the CDC's Agency for Toxic Substances and Disease Registry's then-director Christopher Portier, PhD, the agency began a three-year systematic review of the health risks of cell phone radiation in order to incorporate scientific information from the 2011 determination by the World Health Organization's International Agency for Research on Cancer that cell phone and other wireless radiation is a "possible human carcinogen." CDC composed new text for its fact sheet on cell phones and health in order to incorporate new research.

The New York Times exposé did not include these key points gleaned from the internal documents:

1. INDUSTRY FUNDED RESEARCHER STARTED CONSULTING TO THE CDC: In June 2014, the CDC posted on its website specific advice to reduce exposures, especially regarding children. Immediately after the CDC posted these cautionary warnings related to cell phone radiation, the CDC hired as a scientific consultant Kenneth Foster, PhD, a researcher whose work is often funded by the wireless industry. According to the internal documents, on June 11th a CDC official states in an email that Dr. Kenneth Foster is a "SME (subject matter expert) we now have on board and...If we want to develop any new fact sheets on non-ionizing radiation matters, his scope of work covers that as well and he can quickly draft them for us." CDC officials then discuss engaging Foster to review the new cell phone fact sheet (page 254 of the internal emails).

Why should we be concerned that Kenneth Foster is lending expertise to the CDC?

Foster has a long history of close ties with industry—publishing multiple industry funded articles that seem to conclude there is little risk from cell phone and other wireless radiation.

For example, a widely publicized review by Foster with CK Chou was funded by the Mobile Manufacturers Forum and concluded that the radiation dose to a child's brain from cell phone use does not differ from adults. However, a recent new paper published in the IEEE exposes glaring inconsistencies and systematic errors in Foster and Chou's review. EHT Senior Medical Advisor Robert Morris, MD PhD, and expert co-authors, document, "what appears to be a deliberate distortion of the science and a boldfaced effort to downplay potential risks to children using mobile devices," and take the unusual step of calling for the Foster and Chou paper to be withdrawn from publication. Foster also published several other often cited reviews of research on the health risks of wireless systems, funded by the Wireless Alliance, that minimize the research showing health risks to children.

Strangely absent from the FOIA response is any record of direct communications between Foster and CDC staff as they worked together on non-ionizing radiation website content, although the documents specifically references that such communications were initiated. The end result was a change in advice, and a deletion of information that effectively removed any foundation for concerns.

2. THE CDC DECIDED AGAINST SHARING INFORMATION ON THE RISKS OF CELL TOWERS NEAR SCHOOLS AND HOMES: In emails written in 2014, CDC officials contemplated adding content about cell towers that never made it to the agency website. The agency noted, "Similar to cell phones the data appear to be contradictory but this is where CDC could be of service to clarify the research." A CDC official describes how people were trying to stop a cell tower up on top of a local elementary school and "people had signs in their yards protesting the tower because of radiation concerns. So it's definitely information people are looking for" (page 94 of internal documents). EHT notes that information on cell tower research was never added to the CDC site.

And finally: What lay behind the successive watering down of CDC information on the risk to children from cell phone radiation?

3. INFORMATION ON THE RISK TO CHILDREN IS REMOVED PIECE BY PIECE: On August 18, 2014, the bulk of sentences cautioning the public of the greater risk to children from phone radiation were removed because—according to what CDC officials state in the emails—"We thought the struck language was hard to understand." (page 397 of internal documents). In fact, according to the internal documents, this precautionary wording was developed by considering the precautionary stance of other governments and expert groups (page 142 of the internal documents). Some recent precautionary advisories from government officials include these from France, Israel, Cyprus, Belgium, and Germany.

Please take a look at the re: wording about children's health that was deleted from the CDC website in the language below:

Currently, there is no longer a statement about children anywhere on the webpage. It is unknown at what date this text was deleted but was sometime after August 20, 2014.

See below the information that was deleted about "caution in" cell phone use.

"Can using a cell phone cause cancer?

There is no scientific evidence that provides a definite answer to that question. Along with many organizations worldwide, we recommend caution. More research is needed before we know for sure if using cell phones causes cancer."

"The rejection of WHO/IARC and then-CDC agency chief Dr. Portier's advice to reduce exposures to cell phone radiation reveals a stunning disregard of science at the CDC. These internal documents show that the CDC retracted simple precautionary advice already being provided to citizens of governments in Israel, Cyprus, France and Belgium. Why are US agencies witholding this information from the public? Why was an industry-supported scientist brought on to consult with the CDC?" stated Devra Davis PhD MPH of the Environmental Health Trust.

SEE IT FOR YOURSELF

EHT has more information related to missing emails referenced in the internal documents which will be shared in a follow up post. 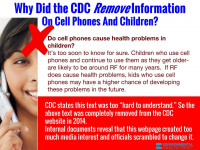