Dillon, CO -- (SBWIRE) -- 11/28/2012 -- Scientific research continually advances our understanding of life on earth, but according to horticultural scientist and author Joe Bender, scientists shouldn’t reject religion. Bender expresses this viewpoint in Lost in an Idyll, his newly released epic poem. Lost in an Idyll is an adventure story, about a surfer and entomologist named Paul, who travels to Amazonas, Colombia, in search of undiscovered insect species.

There, Paul’s plans fall through, when he becomes lost in the forest. Soon, he faces a threat more daunting than being lost, and must fight in a surreal war, reminiscent of battle scenes from The Iliad, The Odyssey, and The Aeneid. Hiking along in search of civilization, Paul encounters diverse and sometimes threatening flora and fauna indigenous to Amazonas. Though he lacks faith as his ordeal begins, through his adventure, he learns to revere God.

Written in blank verse, Lost in an Idyll is composed of a mixture of modern and archaic English. Lost in an Idyll was inspired by the poetry of Homer, Vergil, Dante, and Milton, and by The Bible. Readers who are familiar with these works will notice frequent parallels and references to them in Lost in an Idyll; however, familiarity with them is not requisite to appreciate Bender’s epic. An anonymous review on barnesandnoble.com reads:

“Must check out! If you enjoyed the classic Greek epics like The Aeneid and The Iliad and Odyssey you will enjoy this. It is a novel twist on the classic poetry style for a modern era. Complete with intense battles and a good message. Highly recommended.”

Lost in an Idyll is now available worldwide at amazon.com, barnesandnoble.com, and Apple’s iBookstore, for 2.99 USD or the equivalent. It is available exclusively as an ebook.

About the Author: Joe Bender
Joe Bender earned his BS for Horticultural Science at the University of Florida in 2009. He is an avid skateboarder and sponsored snowskater, and currently works as the Chief Horticulturalist for soon-to-be, New Jersey-based Breakwater ATC. 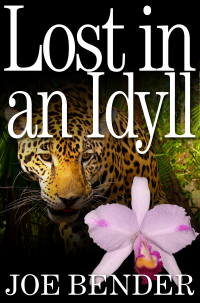