Publisher and author DT Jones’ book, ‘Trust Me’ is a steamy, scandalous romp that follows the adventures of a librarian on the trip of a lifetime. When Sandra Dennis meets Creighton Ashford, he sends her heart into free fall and catapults her on a wild and sensual journey through France. Fans of Sylvia Day and EL James will be enthralled by this tale of dominance, submission and one of the sexiest heroes to ever grace the page.

Two weeks in paradise, a suave businessman with a private yacht and a knowing glint in his eye. Throw in a little intrigue, adventure and maybe a riding crop or two and it’s enough to make even the most seasoned reader blush.

“My main character is a librarian, so already you might get the impression she’s a shy, retiring type,” says DT Jones, author of ‘Trust Me’. “After she wins a trip, she thinks the most exciting thing that’s going to happen is the fact that she won’t have to ‘shush’ anyone for two weeks. But then, she meets Creighton Ashford on her travels and let’s just say that he has other plans.”

Juggling a mix of mystery, romance and heart-pounding erotica isn’t an easy task, but DT Jones isn’t afraid of the challenge.

“I like my stories to push the envelope,” says the author. “Readers want to be taken into their deepest fantasies and their wildest imaginings. Escapism at its best!”

Synopsis
“I want you to drive me wild,” she whispered and listened to his hearty laughter, the cool object slowly caressing the inside of her calves, causing shivers of anticipation to race along her nerves to the center of her desire. She recognized the feeling of leather and blushed even deeper when she realized he was using the riding crop. The idea of it made her feel oddly aroused. In a deep tone barely above a whisper, he said, “Let’s play.”

Librarian Sandra Dennis is a small town girl who has always dreamed of visiting France. After winning the trip of a lifetime she finds herself exactly where she wants to be. Two weeks in paradise and nobody to tell to be quiet. What more could a girl want? Suave, handsome Creighton Ashford seems to be the answer to a girl’s fantasy. Living on a private luxury yacht, this eco-friendly Adonis has a way of making a heart skip and a mind forget all logic. When Sandra learns Creighton has a mafia king after him, she joins him in a trip across France to find The Don’s daughter and return her to Italy before time runs out and he’s forced to marry her. In his arms, Sandra discovers an exciting world of passion, erotic desires and thrilling adventures she could never have imaged existed. Will she be able help him in his quest before her vacation is over, or will she lose her heart to him forever?

For the best-selling author, writing is more than just a career.

“Frankly, it’s a lifeline,” says Jones. “That’s one reason why I try to help other authors achieve success. People in their lives might think it’s a hobby, rather than a passion and they won’t understand the challenges and the emotions that come along with making writing the focal point of your life. Not to mention, selling hundreds of thousands of copies of your book isn’t an easy task! I want to pass on what I’ve learned.”

Jones has succeeded with her mission, founding ‘Diamond Tip Publishing’ to work with other authors in the field.

“My publishing company is the result of my own blood, sweat and tears, and it fulfills my desire to spread the word about talented authors that might otherwise be unable to catch a break,” says Jones. “Writing ‘Trust Me’ was such a joy and I’d like others to be able to share that joy of having their work recognized and celebrated.”

Continuing, “But that doesn’t mean I’m going to put down the proverbial pen! I have a lot more stories up my sleeve! ‘Trust Me’ was just the beginning.”

Since its release, the book has earned glowing reviews.

“What an entertaining book. Some amazingly hot sex scenes but also a great story of friendship and love, sibling rivalry and a little mystery thrown in. I can't wait to read the second book,” wrote Mrs. Alison M. Woodhams.

‘Trust Me’, published by CreateSpace, is available now in both paperback and Kindle formats: http://amzn.to/1mc0jD1

About DT Jones
DT Jones has always loved to write and has been doing so for over 30 years. As a dreamer and a romantic at heart, it was only natural she would find her way into the world of publishing. Born in Colorado and raised in California, DT Jones now lives with her husband and family among the scenic mountains of Utah. With Travel as her companion, she discovered the thrill of storytelling and now shares her passion with the world. 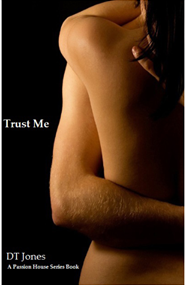