"The Desires of Anais . . ." is available now on Amazon by going to http://www.amazon.com/Stirring-Sexuality-Neo-Tantric-sexuality-ebook/dp/B00DQSWFXS

Abandoned sexually by a husband who takes part in serial affairs, Anais finds Louis, a man with whom she begins an affair of her own. Anais finds herself captivated by her new lover. Under his power she experiences a new world of exciting sex, and soon with a growing addiction to sex, she agrees to to sell her body both on the streets of LA and at parties for Louis's friends.

As she continues fulfilling her lover's every wish, she meets a man very different from any other Anais has known. Jean-Claude takes Anais from the dark path of sexual control to realizing her true potential in the pleasure she can give and experience, and the fact that she is, in reality, a sexual goddess.

About Jean-Claude Carvill
Originally from France and first published in Europe, Jean-Claude Carvill was once bluntly told he was too outrageous for America, and that he would never be published in the USA because American readers were not ready for his intense explorations of sexual fulfillment. However, he has found a strong readership in America with his previous three books:

Jean-Claude Carvill is a Beverly Hills Sensuality Intimacy Coach with over 20 years of highly experienced professional knowledge in the Tantric, as well as other less well known fields of sexual and sensual pleasure. 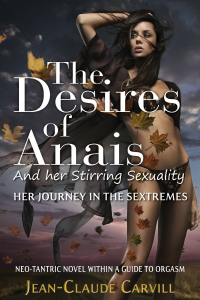