Everyone Needs an Alibi: Multicultural Fusion Artists Ari and the Alibis Give You One

Infusing funk, jazz and samba with blues, soul and tango, Ari and the Alibis have created a memorable, ear-catching sound that will be showcased on WiFi PR Group’s compilation, Indie Anthems Vol. 6.

Las Vegas, NV -- (SBWIRE) -- 06/06/2014 -- For having been together for less than a year, Sarasota, Fla., fusion group Ari and the Alibis have already begun making waves in their Tampa Bay indie music scene and carry the potential to spread their music far beyond state lines. Sporting a sound most often compared to Chicago, Tedeschi Trucks and Squirrel Nut Zippers, this musical outreach will begin when their track, “Bon Appetit,” is featured on WiFi PR Group’s upcoming compilation, Indie Anthems Vol. 6.

Depending on the speed of their songs, the genres Ari and the Alibis blend together can vary. Fast songs, for example, take on elements of funk, jazz and samba, creating a robust and vibrant sound that inspires dancing among the crowds. When they slow it down a notch, listeners are taken on a journey through blues, soul and even tango—all of which combine to create a unique, multicultural sound that they continue to develop as they wrap up their first year together. In fact, they’ve already amassed over a thousand fans in five cities, recorded their self-titled EP and landed a weekend at the world-famous House of Blues in Orlando.

The group is comprised of five talented members of the Sarasota music scene: Arielleh “Ari” McManus on vocals, Nicolaas Kraster on guitar, Gregg Voorhees on bass, John Walker on drums and James DaBone on trombone. Particularly notable are Ari’s powerhouse voice, filled with emotion and strength that grips the listener from the very first note, as well as the standout performances of James’ trombone playing, which the band says allows the faster songs to sound even more upbeat and the slower songs, even sadder and richer.

Ari and the Alibis are looking forward to having their track “Bon Appetit” featured on WiFi PR Group’s upcoming compilation, Indie Anthems Vol. 6, a collection of international independent talent that WiFi PR wants to put on the radars of music lovers and industry tastemakers the world over. Set to be released at Toronto’s NXNE in June 2014, the digital mixtape will be handed out on 3,500 download cards to festival attendees, and 1,500 more download copies will be made available via the Indie Anthems Bandcamp page.

Also in the future, Ari and the Alibis plan to book a tour through the Northeast in July and a brief European tour in October, and they will be recording their debut full-length album. The group also hopes to soon get on the rosters of major world jazz festivals.

To catch Ari and the Alibis live, fans can check out some of their upcoming performances, including a festival appearance at The Great Outdoors Jam music festival in Lakeland, Fla., on July 3rd and their first headlining slot at Skippers Smokehouse in Tampa on July 15th.

Ari and the Alibis’ music is available via their ReverbNation page and their website, and soon they will be selling on iTunes and Amazon as well. Those interested in hearing more can also check out some of the band’s videos on YouTube, such as “Like No Other,” “Drinkin’ Again” and “I’d Rather Go Blind.” 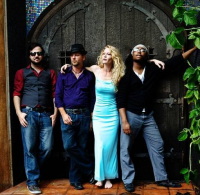