New York, NY -- (SBWIRE) -- 02/08/2013 -- Former WWE performers Shad Gaspard and Marc Coponi have signed with Eisenberg-Fisher Productions for an independent feature based on their upcoming comic book, “Assassin and Son”. The Team is presently negotiating with Eviltree Studios for a mobile application and potential gaming platforms. Eviltree maintains a first-look deal with Sony Studios.

The non-wrestling related “Assassin and Son” tells the story of New York assassin Donovan Braddock, known as The Horseman of Death, whose wife is murdered in front of his infant son. Together, the surviving Braddocks & his young son must now walk a deadly path of vengeance in the gang-ridden New York underground.

Gaspard & Copani performed for wrestling impresario Vince McMahon’s World Wrestling Entertainment (WWE). Gaspard from 2003-2011, predominantly as part of the tag team Cryme Tyme, after leaving WWE he spent a year performing as a Shakespearean theatre actor, then started perusing a carrier in film & Television. Appearing as a guest star on shows such as The Game (BET), Law & Order (NBC), and The Exes (TV Land). As well as in the film Petunia staring Thora Birch.

The Sicilian Copani wrestled as Muhammad Hassan, an Arab-American, from 2003-2005. Caponi holds a Degree in history as well as chilled education, and is an accomplished screenwriter. He has had several scripts optioned ranging in the genres of Action, Romance, and Horror.

"Assassin and Son" is heating in Tinseltown with ancillary offers of a Videogame and Anime cartoon series. Composer Misha Siegal ("The Last Dragon," "The Phantom of the Opera") will score the film, and several rap artists are under consideration for original songs. 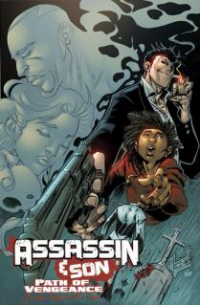