Tempe, AZ -- (SBWIRE) -- 05/08/2012 -- Mobile gaming has advanced leaps and bounds over recent years. The advent of the iPhone, iPad and iTunes marketplace has turning the sector in to big business. Drawn to this substantial market, enthusiastic teams of cutting-edge game developers have created some amazingly successful titles; the Angry Birds franchise springs immediately to mind.

Gamers everywhere have had their eye out for the next big thing, the next game to be so hugely popular that iTunes users everywhere would download it by the millions. From the looks of things, they haven’t had long to wait. A new game from a small independent game studio is setting the iTunes marketplace on fire. It’s name? Demolicious.

Demolicious is perhaps the first game to truly demonstrate the full potential of the new iPad2. With stunningly effective and flowing 3D graphics, the literally explosive action-puzzle-shooter is clearly on track to becoming the next Angry Birds... and then some.

Developed by Strange Games, Demolicious has clearly tapped in to a winning formula as a highly addictive puzzle game which requires gamers to destroy crates on their way to glory and success. Already touted by some figures in the industry as the iPad game of the year, Demolicious stands out both due to its compelling gameplay – many report spending hours lost in the game – and stunning visuals, some of the best seen on an iPad to date. User comments are exceedingly positive. “The 3d graphics run smoothly on my iPad 2 and look great,” one happy gamer commented recently. “The levels are clever and the multiple cannons make for interesting puzzles.”

So for those eager to take the plunge and buy Demolicious now, it’s only a quick visit to iTunes away. With a recent update including new levels and extended gameplay – now including two hours of content – it’s easy to see how the next big thing on everyone’s lips is going to be Demolicious, the best value and most exciting offering to grace the app marketplace since Angry Birds. It’s clear to see that the team at Strange Games are on track to massive success thanks to the amazing game they’ve created in Demolicious, available to iTunes users right now.

About Strange Games
Strange Games are a small development studio dedicated to creating interesting, original content for mobile gamers everywhere. With their latest offering, Demolicious, the Strange Games team have created what many suggest is the best iPad game of the year. A hybrid puzzle-strategy-shooter, Demolicious is on track to become the next Angry Birds phenomenon. For more information, visit http://www.strange-games.com 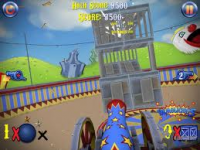