Morris Plains, NJ -- (SBWIRE) -- 10/29/2012 -- The Face of 47 Percent™, a grassroots organization in support of and in response to the Democratic Party’s 2012 Presidential Election Campaign, now has “The Face of 47 percent and… a Proud American”, and 10 alternative insignia tees available on their website and sold worldwide on Ebay.

“We want to send a message to Governor Mitt Romney and the Republicans that we are the 47 percent. We are the people he has put down and cast final judgment – the people who work hard to provide for our families and make a difference in this world – the ones Governor Romney labeled believed they are victims and unwilling to accept personal responsibility for their lives,” said Penelope Lopez, founder of thefaceof47percent.com. “We are the infrastructure and the backbone President Obama often refers to, the impetus building this country ‘from the inside out,’ stemming from the strength of our robust middle class, returning our country from one of deficit to surplus as we’ve seen during the Clinton Administration.”

Apparel is available in both women and unisex in white, black and pink color choices.

“The t-shirts symbolize the movement and strength of the 47 percent. ‘Proud American’ is just one of the 11 t-shirts in our line we offer. If you’re a ‘Proud Latina, ‘Proud African-American’, ‘Proud Miner,’ ‘Proud Blue Collar Worker,’ there’s a shirt for you. There’s a shirt that will capture the essence of any and every one showing that we all embody and personify the Face of 47 percent.”

Lopez hopes supporters will wear these shirts to Romney and Republican rallies across the country. She said this will broadcast the message throughout the land “that the Republicans have lost touch with the people.”

“The Face of 47 Percent mirrors the proud, relentless, unmovable, unstoppable and unbreakable people who directly contribute to the economic strength of this country,” she said. “Join us in sending Governor Romney and the Republicans a clear message: The 47 percent are the conduit that will rebuild and reignite this economy; and more importantly, the 47 percent will help President Obama win this election!”

The shirts tell a message and seeks to educate all -- Governor Romney’s statement that 47 percent of Americans depend on the government was an insult to the hard working people of this nation…it is time we stand up and let our voices be heard without having to say anything.

“Your support in wearing this apparel adds your voice along other President Obama supporters and celebrities. We will show the world that you are a 47 Percenter. Many of us come from humble beginnings, some have not, but all share in our passion even if only in principle and through compassion by refuting the ignorant and malicious statements of Governor Romney,” she said.

For more information or media inquiries, please contact Leah Roberts at media@thefaceof47percent.com or (862) 345-6647. 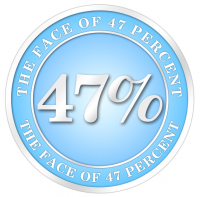