Refreshing & Vibrant Music Delivered via a fiddle, a mandolin, a banjo, an autoharp, percussion, and a dulcimer with 3 part harmony.

Falls Church, VA -- (SBWIRE) -- 11/18/2014 -- The Big Cheese is a family band plus 1 – Larry (dad), Shannon and Lea (daughters), and Julie (former mandolin student of Larry’s). They have a wide range of music stretching from Wildwood Flower to Lady Gaga and has true passion for the music they make. In as much as they enjoy playing traditional music they have a lot of fun playing modern and original music for their audiences who are enchanted by the diverse mix of music The Big Cheese delivers.

In 2012 and 2013, they sat down in a studio and recorded four songs. Their original plan was to deliver them to fans via digital download and maybe a homebrew effort to burn CDs on their own. That all changed after they recorded their May 2014 concert at Epicure Cafe in Fairfax, Virginia. It was a great night with special performances which inspired them to release eight of those live songs along with the four studio tracks on a full-length CD. They appreciate the need to promote their CD so as to avoid that clincher of a joke: "Yes, it's been a million seller for us. We have a million of them in our cellar!" They want to perform as much as possible in as many venues as possible to cultivate a larger fan base as well as a YouTube following.

This talented band is looking to raise $6,000 via crowdfunding to produce 1,000 CDs and three videos as well as a modest advertising budget to promote their CD.

Besides 3 CD’s for $25, they offer a lot of fun rewards like custom tea towels, homemade apple pies, house concerts, and fishing trips! All crowdfunding dollars raised will be allocated as follows:

-$200 to master 4 studio tracks so they’re ready for inclusion on their CD.

-$600 to secure the rights to six of the songs that were written by other people. These songs can’t be included on their CD unless the rightful owners are properly compensated.

-$1000 to mix and master the live recordings. For anyone familiar with the music business this is a very reasonable price for such work.

-$1000 is devoted to video production which most people should realize is also a very reasonable fee for the amount of work involved.

-$1200 will be set aside for CD Production with an accompanying eco-friendly sleeve. That works out to just $1.20 per CD on the intended run of 1,000 CDs.

-$2000 would be invested in promotion. Ruthie Logsdon, no stranger to the music industry, is ready, willing and able to help The Big Cheese book gigs to help them expand exposure with the goal of playing at festivals up and down the east coast.

If they manage to exceed their crowdfunding goal they will devote those extra funds to produce t-shirts and other fun swag to sell at gigs and festivals which would help them cover their travel expenses which have always been out of their own pockets up until now.

This crowdfunding campaign ends on December 8, 2014. 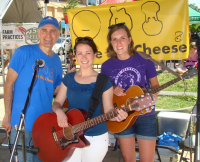