The 1500 hundred year saga of Legends Lost comes to an end with the story of a reunited brother and sister who take on a powerful and evil Lord.

Martinsburg, WV -- (SBWIRE) -- 04/17/2013 -- Author Janet McNulty announces the release of the final novel in her Legends Lost trilogy. The novel is called Legends Lost: Galdin. The final story takes place 1500 years after the trilogy's second fantasy novel, Legends Lost: Tesnayr. Peace has reigned in the land of Tesnayr, but now the barbarian Vasagius threatens the peace. A young woman named Nylana is saved from slavery by her long lost brother Galdin. Nylana had thought her brother to be dead. Now brother and sister plot to save the land of Tesnayr from Vasagius.

Janet McNulty has penned the Legends Lost Trilogy under the name Nova Rose. She has written numerous young reader novels, including the popular Mellow Summers Series, under her real name.

In all the Legends Lost books, she captures the essence of a good fantasy novel, the battle scenes, with a precise and methodical style that readers find easy to follow. Battle scenes are the meat of every good fantasy novel, and to write the narrative of a battle clearly, with simple detail and careful timing, separates the wheat from the chaff of fantasy novel writers.

The Legends Lost fantasy novel trilogy has its own website complete with book trailer videos at http://www.legendslosttrilogy.com

The germination of the Legends Lost trilogy occurred twelve years ago, when as Janet McNulty (writing as Nova Rose) writes in the forward to Galdin, "[it was] the angel on my shoulder who first gave me the idea." The first novel in the trilogy, Legends Lost: Amborese, was published in August of 2011.

Janet McNulty says of her feelings on completing the endeavor of a fantasy novel trilogy, "Finishing the Legends Lost Trilogy brings with it joyful sorrow. Joy because I am pleased to have accomplished the task of writing a story that is dear to my heart. Sorrow, because after spending over twelve years in the lands of Tesnayr, the time has come for me to move on. I hope others fall in love with the story like I did."

About Janet McNulty
Janet McNulty took up residence in West Virginia, moving there after receiving her B.A. in History. She lives with her three cats who keep her on task. When not writing, she enjoys lounging around outside, reading a variety of books by a multitude of authors. Janet McNulty has also published two non-fiction books. 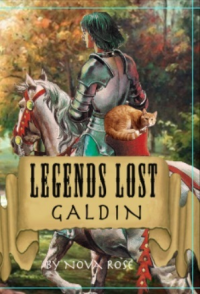