Fantasy Novel Tells the Story of Angels, Demons and the Evaluation of the Human Experiment

Belfast, Northern Ireland -- (SBWIRE) -- 06/27/2013 -- Author Daniel Rafferty, who publishes under his initials D.J.R., announces the release of his new fantasy novel "Counterpoint", a story about the history and modern struggles of humans, angels, demons and just about everything else. Set in contemporary United Kingdom, the fantasy novel tells the story of the Bassett family and the current state of angelic protection of Earth against the forces of evil.

The Bassett family possess special powers to help fight against the forces of evil, and the family comes to the attention of the Angels' Department of Special Operations. Angels move with the times and the Special Operations department is currently headquartered in a corporate office in Scotland. The angels all dress stylishly. David Bassett is a young professional living in a London apartment, who has the ability to move things with his mind. This kind of talent is typical of members of the Bassett family.

The plot incorporates an Angel named Ariel who is the Special Operations department head. His superiors are currently considering that perhaps it is time to make a final evaluation on the "human experiment". David and his partner, Thomas, are very happy together, but the Bassett family are being drawn into an every widening conflict which could be the "final" one. Ariel decides to join the Bassett family as they reluctantly try to fight on the side of good, be that one side, or another, or their own side.

"Counterpoint" is the first book in the Counterpoint Trilogy Series, and is available at Amazon by going to http://www.amazon.com/dp/B00CWH4JGU

The fantasy novel also has its own website: http://www.counterpointbook.com

About Daniel Rafferty (D.J.R.)
Daniel Rafferty publishes under his initials D.J.R. He currently lives in Belfast, Northern Ireland where he is actively engaged in writing the Counterpoint Trilogy Series, as well as other pieces of writing. He aims to incorporate his writing around the grand dramas and questions surrounding the history of civilization. 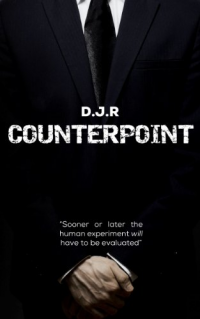