Originally written by Nathan D. Lobell in 1977, ‘Of Things That Used To Be: A Childhood on Fox Street in the Bronx in the Early Twentieth Century’ adds a vital thread to the tapestry of stories from those who built 20th-century society. The Bronx’s Fox Street was far from elegant at the turn of the century, but to Lobell and thousands of others it was a magical playground for the Italians, Irish, Poles, Russians and middle European Jews who settled there. While Nathan Lobell passed away in 1995, his son John is finally releasing the memoir so that the societal shapers of yesteryear won’t be forgotten.

New York, NY -- (SBWIRE) -- 10/02/2014 -- While Nathan Lobell’s prestigious law degree allowed him to bring his children up in the affluent suburb of Great Neck on New York’s Long Island, he himself grew up in without electricity in the teaming tenements of the Bronx. This rags-to-riches existence wasn’t rare for fellow Jews who grew up in the Southeast Bronx in the early 20th Century and, almost forty years after putting his early life on paper, Lobell’s fascinating memoir has finally been published.

‘Of Things That Used To Be: A Childhood on Fox Street in the Bronx in the Early Twentieth Century’ is a microcosm of life in the Bronx during 1916 and 1926; collectively summing up all who lived there and the vital contribution they made to an evolving American society. Lobell’s grassroots insight is not only rare, but of huge value to current young adults shaping the 21st century.

“’Of Things that Used to Be’ describes the rich and colorful lives of the Jews in the Southeast Bronx between 1916 and 1926 where Nathan Lobell grew up. Here you will discover how to score a point at stoopball, how to cheat the gas company, and how to tamper with a butcher’s scale. You will learn how kosher meat is slaughtered, how gas is made from coal, and how to prepare darrflayshe—starting with a trip to Bronx Park to gather wood and ending with a gourmet dish on a carved-out oak plank. You will find out how the buying of soup-greens could be a searing experience. The violence is here—between father and son, husband and wife. The ambitions for the children are described—for the son to be a doctor and for the daughter to marry one. The “woikizz” or vurrkers” (depending on what part of central Europe you came from) are overheard in the passionate arguments about the unions and their politics.

The shopkeepers, their women, the peddlers, the back-yard musicians—the whole cast of characters that made up the pageant of the street is paraded in these pages. In the streets, on the roofs, in the flats—people are everywhere—the kids and their parents struggling to find a way up and out.”

“My father often dreamed of going back to Fox Street, remembering it as “an elegant Venetian canal lined with stately granite palazzos….”. While it was far from that in reality, the area and its cultures shaped very successful futures for many Jews that lived in the Southeastern Bronx during the decade that the book covers,” explains John Lobell. “He always felt that their lives and the area itself was under-publicized and deserved a fuller description. Publishing this book fulfills his wish.”

Continuing, “I was blind to his upbringing during my own childhood but am now acutely aware of just how eclectic those around him really were. There was a colorful cast of characters with some struggling to settle in America, others embroiled deep in debates but a collective culture where everyone made the best of their situation. The tenacity of middle Europeans at that time is a lesson to all of us.”

Lobell’s work has its own unique place in the nation’s wider history books and, with demand increasing, interested readers are urged to purchase their copies as soon as possible.

‘Of Things That Used To Be: A Childhood on Fox Street in the Bronx in the Early Twentieth Century’ is available now: http://amzn.to/1uKetO5

About Nathan Lobell
Nathan Lobell. August 28, 1911 – August 11, 1995. Nat’s way up and out of the South Bronx was through law as his profession and through writing, painting, sculpture, and music as his passions. After graduating from City College and then Columbia Law School, he went to Washington to join with other New Dealers, eventually at the Security and Exchange Commission, ultimately rising to become top staff officer. He resigned to work on Wall Street and to own a small business. After retirement, Nathan spent many happy years in the woods of Wilton, Connecticut writing, painting, sculpting, making and playing violas, and gardening. 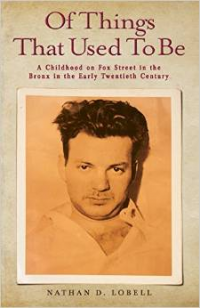