St.Moritz, Switzerland -- (SBWIRE) -- 12/20/2012 -- Olympia Bob Run and the WM2013 committee are proud to present the FIBT/IBSF Bobsleight and Skeleton World Championships 2013 official soundtrack. The soundtrack, published by RTE and produced by ibexmedia, is released as CD Single and as digital download pre-released on itunes and soon available in all major digital stores worldwide.

The soundtrack has been written by the electronic music producer Jerome Keller and interpreted by Elisa "Ellis" Venturin (winner of the singing contest "Back to Nature Game" organized by Olympia Bobrun and the WM2013 committee). The release consists of 4 tracks and it includes the original title, 2 remixes and an acoustical version.

Back to Nature feat. Ellis - Adrenaline is the result of the great efforts undertaken by Olympia Bob Run St.Moritz-Celerina in order to organize a singing contest focused on an extremely interesting prize pack able to make a difference in the career of the winner.

In order to differentiate themselves from the usual sporting event soundtracks, the organizing committee of the world championships dared to do something very different and decided to select a producer, Jerome Keller, able to deliver a track with strong electro influences, thus obtaining a modern and young result which is more appropriate to the sport it represents.

On the 27th of October, participants coming from various nations showed up at Dracula's Gosth Riders Club in St.Moritz to perform in front of a jury. Just one week later the winner recorded the vocals of the song "Adrenaline".

A video clip for the track has been shot and will be released on the 6th of January. Ellis is due to perform live during the opening (24th of January) and the awards ceremonies (2nd and 3rd of February) of said championships. She will also perform live at the Terratrembel festival in Pontresina (9th of February).

The track and its video are going to be distributed to all the televisions airing the world championships, as a part of the standard package of images and videos they are receiving to cover the pauses of the bob and skeleton races. An account of the Adrenaline 2013 musical competition will be enclosed in the package too and is to appear soon on the website "backtonature.ch".

For news regarding the championships please refer to the websites "fibt.com" and "olympia-bobrun.ch". 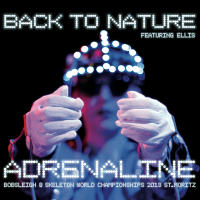