Smart Crowdfunding is slated to carry out strategic marketing initiatives for F.I.D.O., an innovative indoor potty system created by Pet Fit For Life.

Potomac, MD -- (SBWIRE) -- 05/14/2014 -- With brother and sister team Holly Scanlan and Scott Steagall at the reigns, Pet Fit For Life introduces F.I.D.O., which is short for Fully Integrated Dog Omni-Trainer. With this innovative new product they hope to change the way pet owners look at the indoor pet potty. The duo came up with the idea after their elderly parents got a new puppy and they saw the need for a product such as F.I.D.O. However, while their inspiration may have been their parent’s problem, they can also see the potential market with other groups as well. Apartment dwellers, the disabled, those residing in areas with inclement weather conditions, or people working longer hours than their pet’s bladder will allow, are just a few of the people who will benefit from F.I.D.O.

Starting with nothing but an idea, Holly and Scott began collaborating with people who could help make their vision a reality. The process began with a product design consultant. Several discussions later the concept designer was able to create a rendition of what had previously existed only within the constraints of their imaginations. The product engineer then took the renderings created by the designer and brought them to life. Eventually, the F.I.D.O. team was ready for creation of a prototype. In December 2013, with this prototype in hand they knew that their brainchild was ready to be presented to the public.

In order to bring F.I.D.O. to market, Holly and Scott have launched a crowdfunding campaign on Kickstarter. With a start-up goal of $30,000 the team will begin production of the first 2500 base tray units. If their campaign is successful enough to exceed their initial goal by at least $20,000, which would bring their funding to $50,000, F.I.D.O. will launch Phase 2 with their first production model. The crowdfunding campaign offers several perks as incentives for potential contributors. These perks range from pet toys and supplements, to a full system with bonus pads and scented strips, or even a chance to have dinner with the creators. The campaign team is also running a referral contest in which the person who refers the most contributors to the campaign can win a full F.I.D.O. system for free.

After the crowdfunding endeavor, F.I.D.O. will be launched in 3 phases. Phase 1 is the basic system which includes the base unit with 3 drawers, sloped tray, top grate and turf. It is created to resemble a piece of furniture rather than being an unhygienic eyesore, and all 3 drawers hold a scent pad to keep the system smelling fresh. Phase 2 will add a treat container to the base tray. This will keep the treats visible and handy for you and your pet, which encourages them to visit F.I.D.O. Phase 3 is the addition of an automated treat dispenser that will include a voice recorder which enables the pet owner to leave a message of praise for their pet. The engineering team is already in place to begin production of Phase 3 in early 2015 if the Kickstarter campaign is successful. Full details about F.I.D.O., including schematics and a breakdown of costs, can be found on their Kickstarter campaign page.

About Pet Fit For Life
Prior to the creation of F.I.D.O., Pet Fit For Life focused on high quality nutritional supplements for pets. The company was created in April 2013 by animal lovers Holly Scanlan and Scott Steagall based on their mutual passion for pets, and their desire to bring the best products possible to pet owners everywhere.

To make an investment in the F.I.D.O. Kickstarter crowdfunding project Click Here 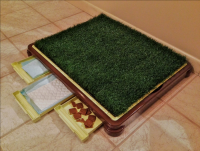