Taylor Carmichael is getting rave review for "My Absolutely Insane Attempt To Rank All Cinema" at Amazon.com

New York, NY -- (SBWIRE) -- 03/27/2012 -- Independent filmmaker, Taylor Carmichael, is attempting to rank every film ever made in the history of cinema. So far he has ranked over 4000 films and annotated many of them with a short review. These 4336 film rankings make up volume 1 of his book – My Absolutely Insane Attempt to Rank all Cinema, which is currently available through Amazon on paperback.

Critical acclaim for the book says it is “entertaining, interesting, and a great guide to movies”. One reviewer describes it as “like going into a restaurant and skipping the drinks, the ordering, the waiting, and even the dessert. Instead, you go right to that perfect bite of steak ... not the first bite, and definitely not the last. But that bite somewhere between number one and halfway done, with just the right amount of pink and red. And then you do it again, and again, and again.”

Although not all films get a review along with a ranking, there are over 1200 reviews in the book, which should keep any movie fan more than happy, with some running into 2 pages or more.

It is impossible to tell how many movies have been made worldwide in cinema history, and it seems to be a question on a lot of people’s minds, with Yahoo answers, Ask.com and Wiki-answers among the high profile databases dedicated to the subject. Certainly the number runs into many millions. The task of ranking every movie ever made for cinema will be a daunting one.

For more information or if you would like to buy "My Absolutely Insane Attempt to Rank all Cinema", visit Amazon.com today. 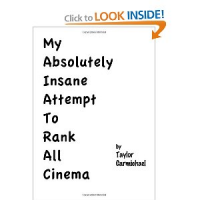