Tempe, AZ -- (SBWIRE) -- 08/20/2014 -- Zombie Map is a mobile device application and a website that features a video player and a world map. The first video informs the user that the Zombie apocalypse is upon them, and asks people from across the world to document the spread of the infection by shooting and uploading films directly to the map - every film will put another marker on the map.

Users will be able to select any marker on the map and watch that short Zombie film, cell phone Zombie attack or sighting, a picture of themselves as Zombies or the #zelfie, news footage of the Zombie apocalypse from across the globe, tips on Zombie survival, kill of the day, and whatever else they can think of.

This project is about bringing people together and having fun with something that belongs to Zombie Fans and Indie filmmakers. It will put the story of the Zombie directly into the hands of the fans of the genre, not just the bigger players in the film and television industry. The first Zombie films were all independent films, and this project is going to keep it that way. However, it will give the fans something they never had before - the ability to make their own Zombie film.

Zombie Map is a culmination of Roze’s career to date. It enables him to shine a spotlight on filmmakers he greatly admires and bring people together around a cinematic Zombie apocalypse by combining his passions for filmmaking and technology.

About Roze
Roze has been making short films since 2002 and made his first feature film, Deadfall Trail in 2008, Speak No Evil in 2012, and Dead Quiet in 2013. Roze also teaches at The Film School at SCC in Scottsdale, Arizona. He is passionate about bringing people together around a cinematic experience. 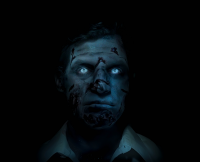