Filmmakers Look to Raise $10,000 via Kickstarter for Saskatchewan Documentary

Southwest Stories is a documentary about the people of southwest Saskatchewan, their communities and the landscape they call home.

These stories, places and things are what filmmakers Craig and Layla Baird want to encapsulate with their documentary, Southwest Stories.

Southwest Stories is a documentary about the people of southwest Saskatchewan, the communities they live in and the landscape they call home. The goal of this documentary is to show the world why this little region is a gem.

This summer and spring, Craig and Layla will be filming throughout southwest Saskatchewan, an area encompassing 71,000 square-kilometres.. The documentary will look at the landscape, the history/culture, people and places that make this unique area of Saskatchewan such a unique place in Canada. Interviewing of residents, mayors, political officials, filming of centennial events, festivals and the tourism/cultural attractions of southwest SK will all be a part of it.

They will be traveling through the area, documenting everything, from the storms moving over the horizon, to the farmers harvesting their crops. There is so much to be found here. The documentary will run for 60 to 90 minutes. Funds are needed for new video equipment and to pay for expenses associated with production.

So far, the couple have received a great deal of press coverage including appearing in five newspapers and on CTV Morning Live Regina.

All sponsors get something for their contribution, with higher pledges getting advertising opportunities including having their company logo on the car as the couple drives through southwest Saskatchewan. 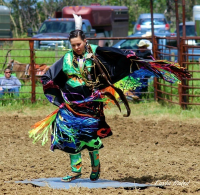