Fiscal Cliff Cookbook Satirist Says I Have to Eat Too

Tongue in cheek barb political satire with appropriately named recipes to keep a smile on our faces as we edge closer to financial disaster.

Dallas, TX -- (SBWIRE) -- 12/10/2012 -- Fiscal Cliff concerns have been the reason of sleepless nights for many Americans. The problem is not confined only to America but is a global issue as well. The author understands the issues related to the fiscal cliff and offers readers a wonderful recipe book as a medium of satire on the whole problem. The book has logic to prove that the fiscal deficit can affect the eating habits of people, and even the most delicious recipe can sound really weird

“Fiscal Cliff Cookbook - eat reasonably well during the apocalypse-with social commentary cliff notes” is an ebook that is being sold online by Amazon Digital Services, Inc. The book is a real cookbook with a satire on the present catastrophic economy of the United States. Stephen R. Winter, the author of the book has tried to highlight the effects of the fiscal cliff on Americans and the names of the recipes satirically change with the worsening conditions of the economy.

The book can be considered as a challenge for newly re-elected American President Barack Obama, who if he does not find proper measures for a fiscal cliff deal, may land the country into a deficit budget deal that will hamper the economy of the US. The book is a great piece of humor where the author tells his countrymen, “We all could use a reasonably good meal and a few laughs”. The book is a blend of political satire and American recipes which express that if the laws relating to the fiscal cliff are not changed, it will hamper the global economy as a whole.

This book can prove to be an irony on the political condition of America, and basically a guide on the fiscal cliff, to inform people about how adversely the debt limit of the country can increase tax rates and the cost of living, and burden the country as a whole. The author cleverly pointed to the fiscal cliff issue through the means of recipes, and one needs to have a great sense of humor to enjoy every bit of it. The book has a whole bunch of fun elements to it, to keep the eyes of the reader stuck to it and at the same time make them learn to cook some awesome mouthwatering recipes that are given funny names by the writer.

In order to buy a book or to get more information on it, you can log into http://www.amazon.com/The-Fiscal-Cliff-Cookbook-ebook/dp/B00AGR5Y5S. 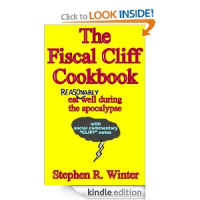