Women are losing the most calories by dancing to the rhythm of the music in their local Gym. Fitness gyms like Curves, LA Fitness and others are following a trend in adapting to fun dancing to attracting and retaining more customers.

Tampa, FL -- (SBWIRE) -- 07/03/2013 -- It is a sight to be seen; a group of women with bright jingly hip scarves and makeup, rushing with their friends, excited as if they are going to a club to get their dance on. Although these girls are dancing to their favorite hip hop beats in the dark, they are not in a 21 or over bar. Instead, they are in their local gym working out, losing weight, wearing these jingly belly scarves and having the time of their life.

The dance atmosphere is catching on to thousands of local gyms across the United States such as Curves, Shapes, 24 Hour Fitness, LA Fitness and YMCA. The addicting trend has assimilated to an estimated five million members at local gyms and attracting new customers. The traditional gyms are acknowledging that exercising can actually be fun, instead of avoiding exercise as if it was an evil task, like a root canal with their dentist.

Some gyms are adding in Belly Dancing classes, Zumba Fitness and Latin Fusion to their once boring track that nobody ran on. Instead of tight shorts and a tidy whitey t-shirt, fitness enthusiasts are wearing glow in the dark racer back shirts, neon cargo pants and pink leopard jinglies dance scarves for their upcoming fashion session.

Jinglies, also known as a hip scarf is a five-foot-wide skirt that has about 150 coins that jingle as the person walks dances or makes any movement. The musical coins help them follow the beat of the music as they are dancing their hips and getting an effective core workout. Calories start to burn as the time slips away in to the forgotten bliss of the song, "Give me everything tonight," by the artist Pit Bull.

The high energy atmosphere will not break your wallet either. Typical classes start at five to six dollars per session, and some gyms offer them for free as part of their membership. As far as jingly scarves, they sell for only ten dollars on the website of Jinglies.com. The founder and CEO of Jinglies said, ""We want all Women to have fun and dance their hearts out so we made a fun scarf which everyone can wear and afford." Jinglies also recently donated a number of children's hip scarves to a local charity sponsored by Yum Brands.

Fitness gyms, dance companies, local charities and Jinglies are teaming up to help charities and workout for a good cause - to help women lose weight on a daily consistent basis in a fun supporting environment. Now, who wouldn't dance to that? 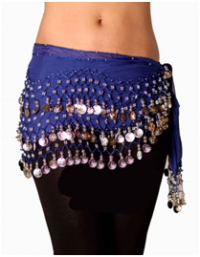