Abieth Winter’s gripping new novel whisks one seventh-grader from her hospital room into a fairy world, where she could be about to start the ultimate war. Fusing a creative narrative with plenty of real-world food for thought, ‘Flit’ is poised to become a vital addition to any young reader’s book collection.

Denver, CO -- (SBWIRE) -- 01/20/2014 -- While young society is under constant scrutiny from the media, many believe that young people are just trying to be good kids, even if the odd bad decision taints their wider reputation. An insightful and hugely-entertaining novel by Abieth Winter explores this concept in great detail, wrapped up in an enchanting story that will delight anyone with a head for fantasy.

‘Flit’ follows twelve year-old Lunar Marrowstern, a young girl who hasn’t had an easy start in life. However, when she leaves behind all she knows to enter the fairy world, the ultimate fight for survival has barely begun.

Flit is a young adult fantasy about Lunar, a recent cancer survivor, who is whirled to a fairy tale land where pretty much everyone wants to kill her. If she can just fire sayre the dragon, then she can help the thirteen-year-old Bat queen kill everyone else, and she’ll get a nice castle and be an honorary member of the Bat family.

Since literally everyone else in the land would be dead, this is a nice offer. Everyone needs to celebrate birthdays with someone. Unfortunately for the Bat queen, Lunar’s not big on being responsible for having people killed, so she is more of a handful than most expected.

Twelve-year-old Lunar Marrowstern isn’t afraid to die. After she learns she has ovarian cancer, Lunar’s only fear is being the left behind kid at school and having to spend another year at home with her parents.

Mr. and Mrs. Marrowstern also aren’t afraid their only daughter is going die, as far as Lunar can tell. Aside from some dramatic sobbing, they appear more concerned about Monty and Jack, her two older brothers, than how Lunar’s handling both the intense chemotherapy, and the realization she’ll have to go into the seventh-grade bald, skeletal, and friendless.

Friendless, until Barnacle, a flying red cat, and Sprigmont, a horned blue bear, appear in her hospital room to slap the self-pity out of her. The first true companions she’s ever had, the cat and bear help her stomach her food and pull out the last of her withered hair. But they fail to mention they’re hunted in their own world, which is why their appearance changes from healthy to haggard in a few weeks. And in their world, someone finally realizes the value of hunting and capturing Lunar.

As the author explains, her narrative helps young readers explore the bold goal of always wanting to do what is right.

“While it’s not commonly understood, doing what is ultimately right doesn’t always result in doing what is moral. Everyone in power makes mistakes – and this reflects in my story. Lunar’s intention is to help the fairy world fight an evil queen, but by doing so she also encourages evil in others. This ethos spreads to the queen herself, who is only driven to war over the grief of her own parents’ murder,” says Winter.

Continuing, “Lunar also battles the difficult but common confusion of her parents not knowing how to love her, even though she only means well. I want my young audience to realize and accept that it is very normal for parents not to try and understand who their children are, and it can make people feel alone. Thankfully, there is always someone out there who understands us – like Lunar; it is just a case of finding them.”

About Abby Winter
Abby Winter does not do well writing bios about herself. She has a Bachelor of Arts in English Writing from Knox College, a small liberal arts school in Illinois most famous for being the site of a Lincoln-Douglas debate, though she can’t recall which one.

She has had two scripts in production – The Butchering Ghost, a supernatural story of a ghost looking for misguided vengeance, a telekinetic, and Zombie Esq., a story about a law firm whose lawyers turn into zombies and start to eat their staff.

She lives in Denver and works for a insurance finance center, but spends her free time writing, going to movies, and attempting to brush the teeth of two very annoyed cats with sharp claws, who she hopes later in life will appreciate her efforts 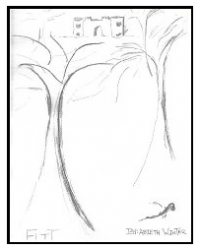