Following the Heart as the Universe Synchronizes Sparks

Bridgeport, CT -- (SBWIRE) -- 04/12/2013 -- This rare and unique e-Book documents four generations of DuBose’s. The major personalities that begin this journey of talent and destiny fulfillment are two dynamic brothers who are now living in their golden years of 70 and Beyond.

During this season , we intentionally pause to give honor to our very own Uncle Clifford DuBose. One who was committed to excellence during one of the toughest times in human history. It takes bravery to be what you were created to be still today in 2013. But this brave soul followed his heart during the 1950’s and 1960’s when Jim Crow influences and back hills of slavery through white supremacy sought to rule the day.

Clifford and Jonathan ”Papa Joe” DuBose, both grew up in the back hills of Montevallo, Alabama. Both like many boys played games and ball in the streets during the week and sing the songs of Zion in church on Sunday. But little did either of them know that there natural born gifts would bring them, their siblings and offspring before the world stage in various national or international forums.

This publishing is about establishing traditions to be passed down to the many generations to come. And lastly, honoring those who we connected with that joined the movement of music by giving your time and life to promoting soul/quartet music. Music is one of the greatest forms of powers in the world. And it our intent to create, perform and distribute music with positive vibrations throughout the airwaves (radio, TV, movie soundtracks, video and live concerts) until we cross over to the other side.

70 and Beyond is not just a story, but a heart and soul preservation movement.

The Book is available from:

In the late 1990’s DuBois begin writing poetry. Her signature poem entitled, To Be or Not To Be landed in hardcover print in America at the Millennium: The Best Poems and Poets of the 20th Century . From 1999 - 2004, DuBois was an active member of the Fairfield Area Poets Society under the leadership of President Rose Marie Barone. A sharp senior citizen and energized leader who gathered a consortium of writers, poets/authors once a month at the Westport Barnes and Nobles Booksellers to share readings of prose with audiences and store patrons. In 2010 wrote and published, 70 and Beyond – The Evolution of Quartet Music in the Life of Papa Joe. In 2012 the eBook format was released online. 70 and Beyond – The DuBose Legacy perspective.

During the past 9 years DuBois worked behind the scenes as director, producer and editor of a weekly segment entitled, Artist Perspective through Sound View Community Media, Inc. namely Artist Perspective TV broadcast which featured some of the hottest artists, musicians, poets and authors and entrepreneurs in the Connecticut region. Artist Perspective series, was a stimulating and provocati ve telecast on Cablevision (channel 88) and AT&T Uverse (channel 99). Our broadcast also consisted of TV/ webcast and radio interview video tapings. Recorded at WVOF/NPR 88.5 FM. Partnerships presently with Connie Johnson of TBOC as co-host and media produ cer and Gospel Alive Ministries, host Gloria Cummings from 2005-2010. Both partnerships have proved to be fruitful and highly beneficial. 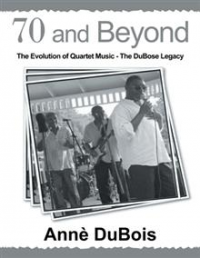