For Love or Money: New Novel Proves Importance of Not Burning Life's Bridges

In his latest novel, author Sase K. Persaud tells the gripping tale of one man’s bad choice; a choice that dramatically changes his life many years in the future. Through fate and chance, his experience is proof that life’s direction could always change.

Queens, NY -- (SBWIRE) -- 11/28/2012 -- At its heart, ‘For Love or Money’ is a story about life’s unpredictable journey. To the reader, it’s a literary journey in its own right; one riddled with tough decisions, tough consequences and a continued search for stability.

“Brad made his choice. He abandoned Ariana, his pregnant Fiancee for the beautiful Italian heiress. Little did he know that someday he would need the help of Ariana to save a life, a life that is dearer to him than his own. Will Ariana help and will she ever forgive him?”

As the author explains, destiny plays a big part in the life of his characters.

“Was it destiny that after abandoning his pregnant fiancée Brad had to seek her help to save his daughter's life years later?,” asks Persaud.

He continues, “It shows that you shouldn't burn the bridge. One day you may need to cross that same bridge.”

Readers will be shocked and moved during the scenes where Brad finds out that his Daughter requires an allogeneic bone marrow transplant within 3 months or she will die. However, the only person who can help is Liam, Ariana and Brad's son. Having abandoned his Mother during her pregnancy, will the truth of his departure come to light?

“Throughout the book, Ariana is constantly searching for the truth. In the case of Brad, extracting the truth isn’t as easy as it may first seem. This leads to Ariana deciding never to forgive Brad for what he has put her through,” Persaud adds.

‘For Love or Money’ isn’t the author’s first foray into the world of fiction. His debut novel, ‘Mirela’, was released in September to critical acclaim.

Die-hard fiction fans with a thirst for a heartfelt story and unexpected twists are in for a treat when they embark on reading Persaud’s latest novel.

About Sase K. Persaud
Sase K. Persaud was born in a small village of Guyana. Coming from humble beginnings he migrated to the United States and started his career as an author by publishing short stories, articles, and now novels. 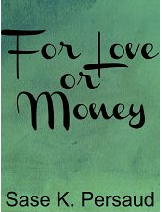