Cambridge, UK -- (SBWIRE) -- 09/01/2015 -- A new Kindle edition of "Beautiful Bodies" by acclaimed author Gerald Stone has been released to coincide the 182nd anniversary of the shipwreck disaster it recalls. The book, previously published in paperback in Australia, is now available for Kindle readers around the world.

At a time when convict transportation to Australia was commonplace, the short voyage and subsequent wreck of the transport ship Amphitrite with the loss of 102 women convicts and their 12 children on the beach at Boulogne-sur-Mer attracted considerable media attention. The shocking sight of the drowned being washed ashore in full view of thousands of people prompted eye-witness John Wilks to report "I never saw so many fine and beautiful bodies in my life. Some of the women were most perfectly made, French and English wept together at such a horrible loss of life."

It was the convict era's first major shipwreck. The death of so many women and children, largely due to the incompetence and blind bigotry of those responsible for their safety, was a scandal that threatened to rock the very foundations of the transportation system. The British Government's response was to resort to a cover-up, refusing even to release the names of the convicts. Only by the efforts of those who knew the truth did Parliament finally act to bring to an end the iniquitous policy of transportation. That decision came too late for those nameless women of the Amphitrite who had been effectively sentenced not only to death but to oblivion – denied the simple dignity of an identity.

In his compelling narrative, Gerald Stone brings the women and their captors to life, identifying them, revealing their back stories, and lifting the lid on the fateful decisions that led to the tragedy. Mr Stone said "I am delighted that the story of the Amphitrite and her cargo of doomed women convicts can now be read worldwide. This truly was a disaster that shocked the French and the English, two nations that had only recently made peace with each other, and it was made even more shocking by the fact that it could all have been avoided. I am glad that finally, after all these years, a wrong can be righted and the lost women can be remembered."

"Beautiful Bodies" is available for download from the Kindle books section of Amazon, and more about the story and the author can be found at the Beautiful Bodies website: (http://www.beautifulbodies.rip)

About Gerald Stone
Best-selling author and acclaimed journalist, Gerald Stone served (between 1979 and 1992) as founding executive producer of the highly successful 60 Minutes program broadcast by the Nine Network of Australia. He later served as editor-in-chief of the Bulletin magazine. He emigrated from the USA to Australia in 1962 and made his debut on ABC's groundbreaking "This Day Tonight". His previous books include the bestselling "Who Killed Channel 9?" and "1932", a critically-acclaimed portrayal of Australia during the most turbulent year of the Great Depression. In January 2015 he was named as a Member of the Order of Australia (AM) for "significant service to print and broadcast media as a journalist, editor, television producer and author". 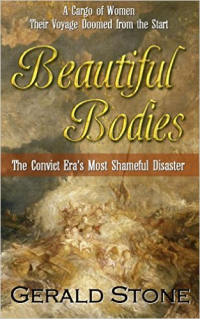