Virtual Hero is software which creates personal game apps that are branded with the theme of the event while at the same time featuring the guest as the action hero.

The company’s Digital Graffiti Wall software, Air Graffiti, flipbook softwares like video flip, flipbook printer and flipbook photobooth have already created a lot of buzz throughout a wide variety of family and corporate events. Now Virtual Hero, which has experienced excellent feedback after only a few corporate shows, is just starting to capture the audience's imagination.

The idea behind this new software is simple but impressive. Participants at a party are presented with three games to choose from and they then have their picture taken in front of a green screen. The photo on the game poster is replaced with the guest’s face which is printed and presented to them individually. Each photo also has a QR code which is scanned to install the game into their iPad or smart phone. After the process is complete participants have a gaming app installed on their device which features them as the action hero.

FotoMaster claims that with Virtual Hero audiences will be able to completely brand games and software according to the event’s particular theme- be it a corporate marketing event or a bar Mitzvah. The lifetime license for Virtual Hero costs a one time fee of $3950, and it also includes a year of free upgrades and support for life. FotoMaster says that the software is designed for quick customization and simple branding.

“We have created the game in a way that allows you to choose your own backdrop and logos in designated places in the game. Just point the software to your assets and have the games branded,” says FotoMaster.

FotoMaster also claims that the initial response from the public has been extremely encouraging and they are receiving frequent requests to display Virtual Hero stations at a wide variety of events. Currently there are three games being offered but the company is looking to expand their range.

No doubt this new concept from FotoMaster is extremely promising, and time will tell if Virtual Hero is going to be their next big success. To learn more about FotoMaster, please visit: http://fotomasterltd.com/products/virtual-hero/

About Foto Master
Foto Master is an entertainment software developing company established in 2008 by Boaz Telem and Ron Malkin with the aim is to create new and exciting attractions for entertainment centers, special events and theme parks. Their popular products include the Video Flip, Bobble Heads, AIR Graffiti and Virtual Hero. Their client list includes a wide range small firms and big enterprises. 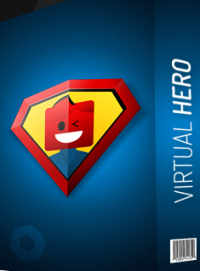