Las Vegas, NV -- (SBWIRE) -- 01/10/2014 -- The Irish Comedy Tour takes the party atmosphere of a Dublin pub and combines it with a boisterous, belly-laugh band of hooligans. The clover -- make that clever -- comedians, whose ancestors hail from the Emerald Isle, include Detroit native Derek Richards; Boston-born Mike McCarthy; Nova Scotia's Damon Leibert; and from Inchicore, a suburb of Dublin, Ireland Derrick Keane. These hilarious Irish-American comedians tear apart as well as validate all of the Irish myths and stereotypes.

Their goal is to create a turnkey product that will blow away a network executive to where they say, 'this is hilarious and we can air it now.'  Experience, good people & technology are needed to create a network quality product.

The Irish Comedy Tour is doing a multi-camera video shoot on Friday, February, 28, 2014, at one of their favorite venues, Infinity Hall in Norfolk, CT.  The finished product will be pitched to the networks in hopes of getting the show the national exposure it deserves.  This has been their dream since they started the tour in 2006, now it's only a couple months away!

The recording is taking 5 high definition video cameras, a fully equipped production truck, cases of equipment, and a cast of 10 exceptionally talented people lead by Bradley O'Connor of O'Conchobhair Productions.

The funding budget for this project is $18,500. The real budget for the video shoot including editing is just under $26,000.  The Irish Comedy Tour would love to offset the cost of this through this campaign. 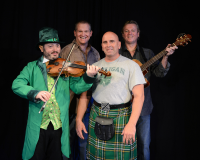